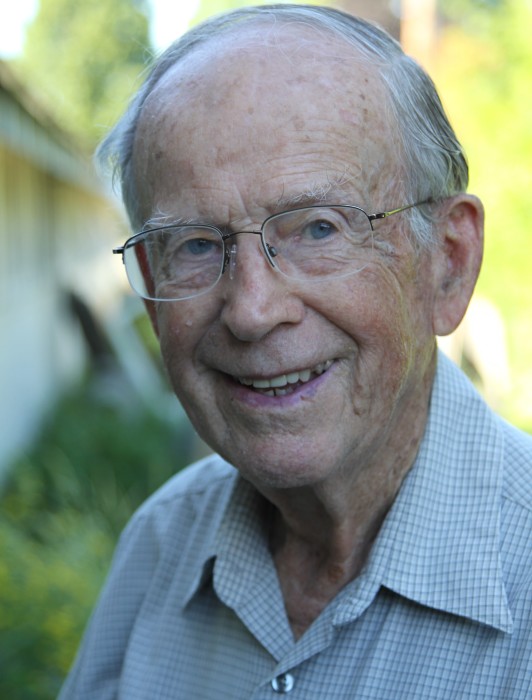 Winfred Denver Reimer, age 97, of Bellingham passed away in Bellingham Sunday, April 7, 2019. He was born June 26, 1921, in Hillsboro, Kansas to parents Dietrich Cornelius and Nellie (Voth) Reimer. He married Alyce Carolyn Archer, August 23, 1946 in Newton, Kansas.  Winfred was born on the farm 6 miles East of Goessel.  He went to school for the first 3 years at Pleasant Valley District #27, Marion County Kansas.  Certificates reveal he was neither absent nor tardy the entirety of 1929, 1930, and 1931 school years.  His family then moved to a farm West of Newton in Harvey County.  He completed his grade school years at Prouty School and graduated from Newton High School, with the class of 1940.  Winfred was a member of the First Mennonite Church in Newton and was baptized by Rev. J.E. Entz on May 16, 1937. From 1942 through 1946 he served in Civilian Public Service.  He initially reported to Weeping Water, Nebraska and was later selected to continue the experiments at the Agricultural Experiment Station in Lincoln, Nebraska.  This was followed by additional service in Colorado Springs, Colorado in 1946. While Winfred was in Lincoln he met Alyce Archer who was a student at the University.  They were married in the First Mennonite Church, Newton, Kansas by Rev. Lester Hostetler.  Winfred attended Bethel College from 1946 to 1947.  When his dad (D.C. Reimer) bought the C.A. Reimer home place from his brother Arnold in December 1947, Winfred farmed it until 1959. The farm, which is located on the McPherson-Marion County Line, South of Canton, became a dairy, with Winfred selling Grade A milk from purebred Ayrshires. Unfortunately he was only able to harvest seven of 13 wheat crops living there.  Winfred and Alyce were 4-H leaders, active members of the Alexanderwohl Mennonite Church, and earned the Balanced Farming and Family Living Award for McPherson County in 1953.  Winfred was also on the Board of Directors of Kansas Farm Bureau. They had a farm sale and moved to the State of Washington on August 1, 1959, where they bought their poultry farm, and where they continue to live.  For ten years Winfred had a retail bakery route.  All eggs from their farm were sold directly to customers, either on bakery route or at the farm.  When the two oldest sons graduated from high school and left home, Winfred worked on the staff at Western Washington University for more than 17 years until retirement on June 30, 1986.   Glendale Mennonite church was the family church until 1988, Good News Fellowship followed.  They were always involved in church ministry including the Light House Mission, Wycliffe ministries and volunteering with church friends at Louisa House.  They did mission trips over the years to Guatemala, Panama and Bahamas.  Visiting family for weddings and graduations of all their children and grands was a priority.  They also attended school and family reunions.  Flying or driving truck and camper or RV were fun adventures across the USA.  Gardening vegetables was his yearly spring passion.  They always canned their produce until last year.  Extra food was donated to the food banks, Light House Mission, and friends and neighbors of hundreds of pounds yearly.  They were also in the Whatcom County Dahlia Society and grew many varieties of bulbs.  They entered flowers at the annual show and Lynden fair and won many prizes and ribbons.  You leave us with memories:  That sudden twinkle in your eye, quick wit, big smile, green thumb, hard work ethic, never giving up, love of God and family, and generous heart for others.  He was preceded in death by his parents, brother Vernon Reimer and sister Elvera Jantzen and is survived by his wife of 72 years Alyce; children, Ron Reimer (Jan), Kent Reimer (Jan), Glen Reimer (Jamie) and LeAnn Clement (Ken); 10 grandchildren, 5 great grandchildren; brothers, Allen, Harvey, Nelson and Marlo Reimer; sisters, Arlene Jantzen and Irma McNeff and numerous nieces, nephews and other relatives.  A celebration of his life will be held Friday, May 3, 2019, 11:00 AM at Good News Fellowship Church, 1252 W. Axton Rd., Ferndale, WA 98248. Family requests donations be made to either Good News Fellowship Church, the Mennonite Central Committee or the Light House Mission.  Please share your thoughts and memories online at www.sigsfuneralservices.com

To order memorial trees or send flowers to the family in memory of Winfred Denver Reimer, please visit our flower store.