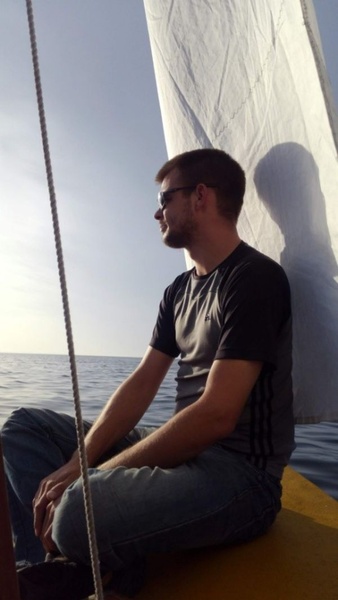 William Lloyd Faber (Bill) was born at home under the Christmas tree to Arnold and Janice Faber December 14, 1986 in San Jose, CA. He was the third of seven children.

Bill was a motivated information systems enthusiast. His goals were to contribute to the design, security, and implementation of computer networks He enjoyed collaborating efficient ideas and taking on challenges that helped him learn new skills. Traveling, meeting new people, and solving problems were some of his most rewarding experiences.

When Bill was six years old, the family began a six-year adventure living on a sailboat and traveling the West Coast of the US and Canada. Bill was creative and resourceful, finding never-ending fun in the simplest things of life. One of the activities Bill was very proud of was learning the fine art of scavenging or “treasure hunting” where he would find everything imaginable as well as many helpful supplies. Bill was homeschooled, and found opportunities to incorporate these unique experiences into his daily learning. He also had a unique interest and curiosity of the world—always being able to ask questions that no one else thought of.

In 1998, Bill, and his growing family moved to a farm in Sumas. Living in this new environment, Bill continued to expand his world. He loved to create his own contraptions for the rest of his siblings, using whatever was available. His mind was always busy. During these years, Bill became interested in computer technology—learning much from his oldest brother. He also worked in construction and masonry with his dad.

In 2008, Bill was severely injured when a car struck him. He spent subsequent years learning to overcome his disabilities. As he was continuing his education, he worked with his oldest brother as a plumber as well as creating his own company—FaberTech. For several years, Bill loved and raised little Kaiden. For the time they had together, Bill was “Daddy” to him. Bill later met his future fiancée, Melanie Hornung, whom he loved very much. They supported each other in work and school and recently moved to the East coast with plans to work towards their dream of living on a boat together.

Bill received his GED in 2010 and graduated in 2015 from Whatcom Community College in Bellingham, WA with an Associates Degree in Applied Science focusing in the cyber security field. He was one term away from graduating from Western Governors University, Salt Lake City, UT with a Bachelor of Science degree in Cyber Security and Information Assurance.

Bill is survived by his Fiancée, Melanie Hornung; his Grandmother, Catherine Broersma; his parents, Arnold and Janice Faber; his six siblings, Benjamin and his partner Tammi, Robert and his wife, Ashlie, Stephanie and her husband Daniel Flint, Samuel, Jannal, and Lydia; as well as two nephews, Uriyah and Phineas Faber and one niece, Arabella Flint.

December 14, 2021, Melanie, with her mother, Marie Matteson, and cousin Chris Faber with his wife Michelle plan to send a portion of Bill’s ashes off to sea from Crystal Pier in North Carolina Simultaneously, the rest of the family plans to send the other portion of Bill’s ashes off to sea in the bay at Birch Bay, WA. Afterwards, there will be a Celebration in honor of Bill’s life at CJ’s Restaurant in Birch Bay.

“I look forward to the days when I can just live on my boat and hang out in the water and fish. Watch the world from a distance.” ~Bill

To order memorial trees or send flowers to the family in memory of William Lloyd Faber, please visit our flower store.