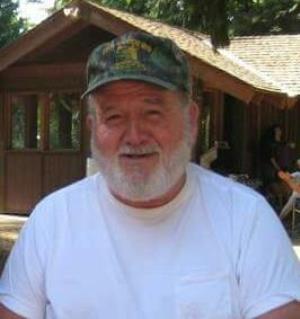 William Edward Crandell released his hold on this life, and entered Heaven peacefully on September 28, 2015, surrounded by his family.

Bill was born on January 15, 1931, in Bellingham Washington. He went to school there until he joined the Army when he was 16. He made it half way through basic training before being discharged when they discovered he was only 16. When he turned 17, he enlisted in the Air Force, and served his tour of duty with them.

He met his wife Dolores (Kammerer) at a skating rink in Ferndale, and they were married on August 18, 1950.

Bill was a machine tender at Georgia Pacific for many years before retiring from there in May of 1990.

He leaves behind his wife of 65 years, Dolores (Dee) Crandell, Daughter Debbie and husband Tim Durbin, son, Robert Crandell, and daughter Cheryl Maxwell as well as grandchildren, Tia and husband Matt Lloyd, Trevor and wife Teresa Durbin, Tara Doyle, Travis Durbin, and Derek and Matthew Crandell along with 7 great grandchildren, Dakota and Montana Lloyd, Hannah and Joey Durbin, Jordie and Brian Doyle, and Summer Crandell, as well as many nieces, nephews, and cousins, including one cousin in particular, Larry Backstrom who was always there to help make sure Bill enjoyed life just a little bit more.

He was preceded in death by his parents, Thomas and Beatrice (Simmons) Crandell, of Bellingham, Washington and Sister Virginia Riffe of Hobson, Montana.

The family is going to have a private service as Bill requested, after his cremation, which was handled so professionally by Sig’s Funeral Services. There will be a Celebration of Life for family and friends at Good News Fellowship in the gym at 1252 W. Axton Rd. on Saturday the 17th of October from 12-3 with a potluck and time to recall memories of Bill.

His favorite thing to do was to either hike or drive up in his beloved mountains, which he did almost daily until the last year or two and that is where his ashes will be released.

In lieu of flowers, the family asks that a donation in Bill’s name would be made to the Wounded Warriors Project, or the Make a Wish Foundation.

To order memorial trees or send flowers to the family in memory of William Edward Crandell, please visit our flower store.
Send a Sympathy Card