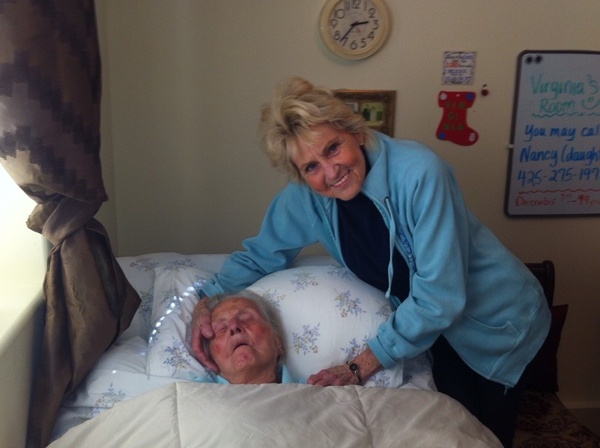 Virginia Christine Anderson Jones Virginia Christine Anderson Jones, age 76, of Bellingham was born July 17, 1942 in Philadelphia, PA.  She left to be with Jesus, Mother’s Day, Sunday, May 12, 2019. Survived by Husband David A. Jones, Daughter Deborah Anne Beck Feig and Son David William Beck; Two Grandchildren: Joshua Nathaniel Feig and Kaitlin Elizabeth Feig; Four stepdaughters: Charissa Joy Jones Bradstreet, Alicia Beth Jones Tamsdorf, Emily Rose Jones McGarvey, Jessica Fae Jones; Six siblings: Rev. Carl Anderson, Bill Anderson, Ruth Anderson Henning, Rev. Roy Anderson, Nancy Anderson Payne, and Christine Anderson Putney; and lots of very loving nieces and nephews. Virginia had the nickname of GinGin or Ginny growing up in her family, and later took the nickname Chrissy. She trusted Christ as her savior at an early age and delighted in memorizing scripture. She was very proud of her Swedish ancestry all her life. Chrissy grew up as a pastor’s kid for 12 years in Malvern, PA outside of Philadelphia, and then moved to Seattle where she graduated from Roosevelt High School in 1960. Chrissy was always very close to her brothers and sisters, whom she loved dearly and was very proud. From an early age she wanted to help the underprivileged, which seemed to be her theme in life. She attended Multnomah Bible College in Portland, OR and graduated from Emmanuel School of Nursing in Portland, OR. She married Kenneth Waldon Beck in 1964 and was a nurse in Everett, WA while they lived in Lake Stevens, WA. Debbie and David were born in Everett, WA. She was the prayer warrior for the Beck family and led small group Bible studies during her time in WA, consistently inculcating the sense of the larger family tribe where love was the focal point of the Anderson clan. As Chrissy’s brothers and sisters returned from mission trips around the world, she always made sure the family shared in the extended family gatherings shared in the multi-cultural times of enrichment. The family moved to Sandpoint, ID in 1979, where she continued to work as a nurse. She got an Associate’s degree from North Idaho College, and a B.A. in social work from Lewis Clark State College in 1992, graduating at the same time as her son, David. Then continued on for a Master’s degree in social work from Lewis Clark State College. She worked as a social worker with Aging and Adult Services in Coeur d’Alene, ID. until 2000. She also completed her coursework for a Master’s degree in counseling. In 2001 she moved to Scottsdale, AZ to care for her mother, and there met and married David Alan Jones, November 24, 2001. Chrissy and Dave lived in Sun City West, AZ until September, 2002, when they moved to Bellingham, WA where Dave began working for Logos Bible Software. Chrissy was an avid reader and loved to sew and watercolor paint, especially birds. She was always very outgoing, loving and caring, and maintained many dear friendships over her lifetime. Chrissy loved her daughter and son and was devoted to her grandkids visiting them regularly in Hawaii. Chrissy loved horses and her pets, both cats and dogs. Dave and Chrissy were active in Bellingham Covenant Church and Lettered Streets Covenant Church in Bellingham, WA. Dave and Chrissy enjoyed their companionship and love until the very time she left to be with Jesus. Chrissy became diabetic in her 40’s and struggled with a brittle Type 1 diabetes the rest of her life, eventually dying from complications of diabetes and dementia. The last three years, with Dave by her side, she was cared for by St. Francis Nursing Home due to her declining health brought on from a diabetic coma in 2016. A celebration of her life will be at Lettered Streets Covenant Church, 2100 Broadway in Bellingham, WA, May 25th, 2019 at 1:00 pm. A second celebration will be held July 13, 2019 at 1 pm at Great Valley Presbyterian Church in Malvern, PA to inter her ashes. In lieu of flowers, donations in Chrissy’s honor can be made to Lettered Streets Covenant Church or Lighthouse Mission, Bellingham, WA.

To order memorial trees or send flowers to the family in memory of Virginia Christine Jones, please visit our flower store.
Send a Sympathy Card