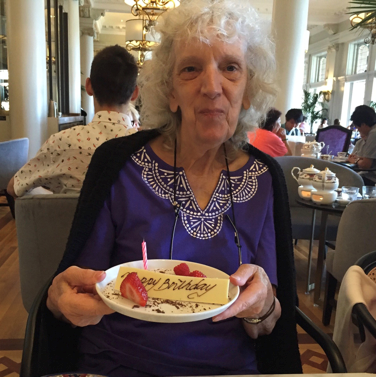 Virginia L. Bock entered the world on August 27, 1936. She was born in Champaign, Illinois to parents James S. and Virginia L.A. Gobble. With the addition of two sisters, Marilyn and Elaine, the family later moved to Chicago, and closer to grandparents and extended family.

A subsequent move brought the family to Washington State, first to Ephrata, where they lived in Army barracks, and then to Walla Walla, where the girls truly grew up. When Virginia spoke to her children about her youth, Walla Walla was always the place she spoke of as her true home. Virginia attended Northwest Christian College in Eugene, OR, where she earned a Bachelor of Theology degree. Virginia loved Eugene and she reminisced about it often in later years. It was there that her first daughter, Tamalyn was born. A subsequent move back to Walla Walla, brought another daughter, Taryn, into the family. In 1963, Virginia married her second husband Joseph D. Bock, who brought his son, James, into the family. Virginia and Joe’s and son Timothy was born during those Walla Walla years. Then, happily for Virginia, back to Eugene again where Joe was to acquire his Master’s degree. In 1969, Joe was offered a great job in the federal government, and the family picked up and made a scary move to Montana. After a year in miserable Glasgow, (a place where Virginia declared that hell is not hot, it’s cold!) they moved on to Billings, Montana, which she deemed much more acceptable. It was there that son Thaddaeus was born. And it was there in Billings that Virginia raised her family in the place that her kids would call home.

Virginia was a woman with many interests. Her love of music, literature and theatre was apparent early on. While living in Walla Walla, she appeared in multiple productions at The Little Theatre. And that’s where she and husband Joe were to meet and fall in love. Later, in Billings, she maintained season tickets to Community Concerts and attended many local plays and musical performances, and subjected her ever patient children to Shakespeare and Beethoven. She also served as a volunteer at the Western Heritage Museum there, and began her graduate studies at Eastern Montana College. Virginia also liked to bake. There was always the smell of fresh bread, oatmeal cookies or her famous chocolate cake, whose recipe was apparently stolen from someone named Mrs. Robinson, wafting through the house. And oh, that rhubarb pie and carrot cake. She was a wonderful baker.

But Virginia could not cook. She tried. She was very much into the seventies casserole movement. There was the infamous peanut butter casserole that still causes the children to shiver. There was the tomato aspic, which is a thing that should never be. There were the “pig eyes” that were served for breakfast (not really pig’s eyes, you’ll just have to imagine). There was limp asparagus dowsed in Miracle Whip. Velveeta on everything. And squash. Lots and lots of squash. Squash bread. Squash soup. Squash with extra squash. She loved the squash. Her kids tolerated the culinary choices as they were not given the option otherwise. Daughter Tam perfected the art of holding food in the mouth without swallowing. Tim would catapult cauliflower into the back yard when heads were turned. And son Tad finally had enough and later in life developed high culinary skills to make up for those unfortunate lost years. Daughter Taryn ate everything. She was the good one.

Born and raised in the Christian Church (Disciples of Christ), Virginia found a church home in each city in which she lived. Whether she was a Sunday school teacher, serving on the board, serving on the diaconate, singing in the choir, chairing a committee, serving as chair of the elders, or providing her ubiquitous pork and beans with cut up hot dogs at church pot lucks -- she was passionate about her duties as a church member and leader. Virginia’s 1980 move to Seattle led her to a new church home, just a hop, skip and a jump from her house on Woodlawn Avenue, Green Lake Church of Seventh-Day Adventists. It was also there in Seattle that her love of God’s people and her experiences caring for people in times of illness and crisis led her to become a hospital chaplain. She found many happy years bringing peace to troubled souls while working for Harborview Hospital. Her love of theatre emerged, yet again, as she and friends from her Seattle church, formed what would become known as the “Geezers” -- a group of folks who made an annual sojourn to Ashland, OR for the Shakespeare Festival. Virginia and a few of the Geezers also took advantage of the many ballet and opera events offered in Seattle each year. And, it was many of those Geezers who made the trek from Seattle to Bellingham, again and again, to visit her in her final days, delighting her and bringing joy and happy memories.

Virginia Bock left the world, December 10, 2019, thirty thousand four hundred and twenty days after she entered it. She spent her last moments surrounded by family and the caring staff of Whatcom Hospice House in Bellingham. Virginia is gone. But her life, her passions and her love will live on in the cherished memories of her offspring and their offspring. And she will not soon be forgotten by those who loved her and knew her.

A memorial service will be held January 2, 2 p.m., at Greenlake Adventist Church, Seattle, WA. Donations can be made in her memory to the American Cancer Society or to the Seattle Times Fund for the Needy.

To order memorial trees or send flowers to the family in memory of Virginia L Bock, please visit our flower store.