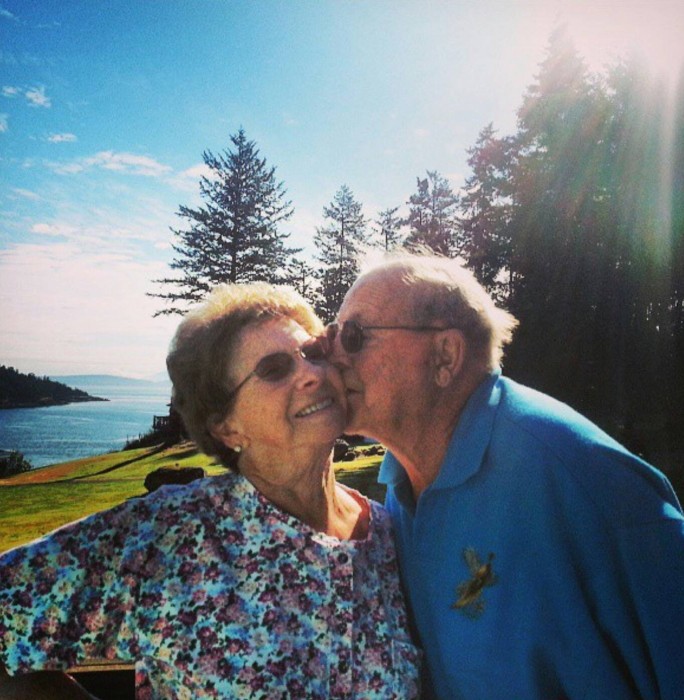 Vernelle Severson Rauch, age 85, was born July 13, 1934, in a farmhouse in Nebraska, 13 years after her next oldest sibling, brother Floyd. She came to Washington with her family, at 2 1/2 years old, when her father lost his farm in the Dust Bowl and the depression. They came to Lynden, Washington as their father drove across Chuckanut Drive he said, “I will never go back, this is heaven, green grass and green trees.” She grew up on the Weidkamp Road, and walked to a one room country school house her first year of school, then went to Lynden Public School. Halfway through the third grade she moved to Wiser Lake Road and started school in the Meridian District. Vernelle was active in many school activities, one of the most important was twirling the baton in front of the band, where she met the light of her life by the name of Edmund “Eddie” Rauch, who played the trumpet in the band. Due to Eddie‘s shyness, Vernelle proposed their first date while attending a high school dance, and thus started the happiest 68 years of their lives. Eddie was called into the Marines Corps, and upon Vernelle‘s graduation, while Eddie was on leave, they were married on June 21, 1952. They lived in California for a year where Eddie was stationed before moving home to their family farm in Bellingham, that Eddie had bought from his father in 1948. While Eddie was deployed to Japan, Vernelle had their first baby Moreen. From the time of his deployment to the time of his passing, they were rarely apart. They returned to the farm to settle down in 1953, and proceeded to have their children Mark in 1956, and their youngest, Matt in 1959. They raised their three children on the family farm and lived a wonderful life. Vernelle was always the life of the party and enjoyed many social activities, as well as hosting parties at their home on the farm, and summers at their cabin on Orcas Island. Vernelle retired from driving school bus for many years from Meridian school district. In her retirement she enjoyed even more social activities with friends, and winters in Desert Hot Springs. Her spunky personality and sense of humor will be missed by so many. Vernelle is preceded in death by her parents Peder and Johanna (Nohr); siblings Sam, Myrtle (Rasmussen) and Floyd; daughter Moreen (Ellis), and husband Edmund “Eddie”. She is survived by her sons, Matt Rauch of Bellingham, Mark Rauch of Kennewick, son-in-law John (wife Teresa) of Arlington; Grandchildren Robert Turman (wife Olivia) of Portland, Oregon, Anna Rades (husband Luke) of Bellingham, and Otto Rauch of Everson; twin grandchildren Holly and Heather Ellis and great grandchildren, twins Jacob and Nathaniel Rades. The family would like to extend their heartfelt thanks and gratitude for the staff at the Christian Healthcare Center in Lynden, for their phenomenal loving care and support during Vernelle’s last months with us.

To order memorial trees or send flowers to the family in memory of Vernelle Ruby Rauch, please visit our flower store.
Send a Sympathy Card