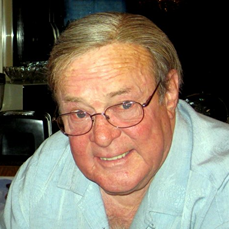 Terry Alan Buzzard, a lifelong resident of Bellingham, went to be with The Lord, passing peacefully at his home Friday, December 18, 2015. He was 73. A boatsman from the age of 3, Terry was a generous friend and a great storyteller known both for his skill at the helm and his tales of maritime adventures and misadventures in Desolation Sound, Southeast Alaska and the San Juans.  Accompanied by a succession of dogs, all named “Rusty”, he lived his life with the motto “My Vocation Is My Vacation”.  Terry was born in Bellingham to Henry Alan and Dorothy F. (Young) Buzzard.  His father and grandfather were speed boat enthusiasts and Terry had his first boat by the age of three. He attended Campus Elementary School, Fairhaven Junior High. As teenager, Terry earned the Eagle Scout Silver Award, the God and Country Award and the Order of the Arrow and worked at the Black Mountain Scout Camp hauling camp kids across Silver Lake on the Scouts “Silver Eagle”. After graduating from Bellingham High School in the class of 1960, Terry worked as a commercial fisherman, then earned his Captain’s License and delivered the U. S. mail by sea to San Juan Islanders.  When U.S. Postal delivery to the Islands ended in 1962, Terry bought the mail boat and started a passenger ferry service called “Island Mariner.” In addition to ferry and freight service, the business grew to include whale-watching trips in the San Juans and the Canadian Gulf Islands, sound monitoring for the Department of Utilities and Transportation during heavy dock and pier construction, and ship and log salvage and towing. In 1980, the company added a Seaplane for spotting whales.  Terry helped with many community and clean-up projects including Valdez, Alaska, and always ready with advice for anyone who asked.  Terry was preceded in death by his father, mother, and six dogs named Rusty and is survived by his wife Joanna and his current Rusty #7, cousins Jason ( Jackie) Buzzard, Jennifer (David) Wright, other relatives and numerous friends. Private services will be held to remember his adventurous life. Memorial contributions may be made in his memory to; The Firs, 4605 Cable St., Bellingham, WA 98229 or KCTS 9 Television, 401 Mercer St., Seattle, WA 98109.

To order memorial trees or send flowers to the family in memory of Terry Alan Buzzard, please visit our flower store.
Send a Sympathy Card