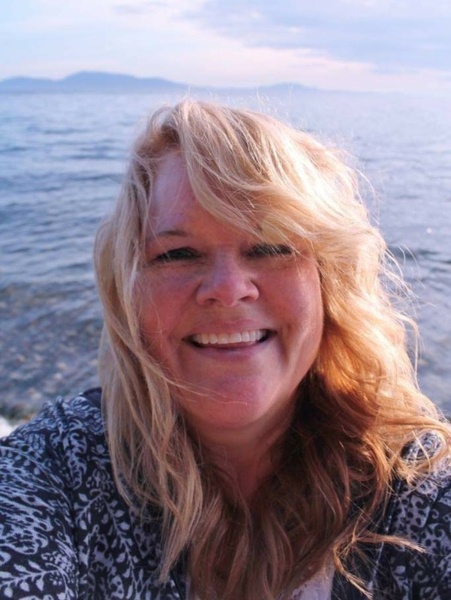 Sherrie Lynn Determan, an Office Receptionist at Honcoop and long-time resident of Blaine WA, passed away unexpectedly due to complications from Lymphoma and COVID-19 on October 4, 2021 at the age of 55.

Sherrie is survived by her partner; Michael Fedor and his daughter, Rosemary. She is survived by her two sons; Matthew Determan and Christian Wood, his wife, Kelsey; her sister Elizabeth (née Determan) Wilson; and her four granddaughters and grandson.

She is preceded in death by her mother and father, Marcia (née Richards) Determan and David Determan.

Sherrie was born in Riverside, California on May 23, 1966 to Marcia Richards and David Determan. She and her family made their way to Washington where both her and her sister attended and graduated Blaine High School. During that time, she met Thomas Wood, her high-school sweetheart who eventually became the father of their two sons. After their separation, Sherrie found her love of 8 years with Michael Fedor. Together, they raised his daughter Rosemary in their new home in the Custer area.

In Sherrie’s earlier years, she enjoyed dog shows and breeding Chow-Chows. She always had a love for nature, large flowers, gardening barefoot, tending to her chickens or her many fish, and seeking adventure. She was a woman who had no limitations on life and she always did whatever she wanted to do. She will be deeply missed by friends, family, and all who knew her.

A memorial service will be planned for later in the spring for family and friends to commemorate Sherrie.

To order memorial trees or send flowers to the family in memory of Sherrie Determan, please visit our flower store.