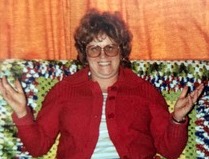 Shelby J. McBeath, 78, died March 24, 2017, at her home following a long battle with breast cancer. She is preceded in death by her eldest daughter Melody Ortiz, and siblings Roy, Charles, Virgil, and Frances. She is survived by her older sister, Blanche Bryan, and children Darrellene Cooper, Cindy Luna, Pam Komac, Kelly Hanowell, and Jay McBeath. She is also leaves behind a legacy of grandchildren and great-grandchildren in Whatcom County as well as extended family in the South East United States.

She was born Shelby Jean Jackson in Fleming, Kentucky on June 20th, 1938, and traveled to Washington state with her family in the late 1960s. Shelby was strong, intelligent, clever, and resilient. She will be remembered for her vibrancy, her wit, wanderlust, and willingness to make room at her table for all family and friends. She will be remembered as a woman on the go, a woman who loved to feel the wind in her hair, the sun on her skin, and to put the pedal to the metal. In some of her final words, Shelby wanted her family to know that she wanted them to be happy, to be healthy, and to know that they are loved. She will be missed fiercely and loved always.

A private service will be held for family and close friends at a later time. A special thank you to all those who have contributed to the memorial fundraiser to honor Shelby McBeath by donating or sharing.

To order memorial trees or send flowers to the family in memory of Shelby J. McBeath, please visit our flower store.
Send a Sympathy Card