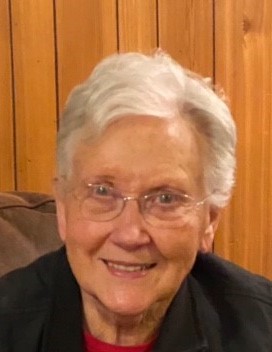 She spent her early years in Lynden where she attended school, worked summers picking berries and helped out at the family general store.

In 1950, Ruby and Dennie started their family with the birth of their son Pat. Soon after they welcomed their second son Jeff and then daughter Nancy a year and a half later. Ruby was a doting stay at home mom to her three children. Once the kids started school, Ruby entered the workforce as secretary for Ferndale High School from 1960 to 1970. She loved her job and looked back on her time there fondly, particularly the lifelong friendships made with faculty and students. She went on to become head purchasing agent at Intalco Aluminum Corp where she worked until her retirement in 1985.

Ruby adored playing cards especially with her ladies pinochle group. She loved a good glass of red wine and get togethers with family, friends and neighbors. Ruby also enjoyed tending to her immaculate garden. She was a die-hard Seattle Mariners fan and stuck by ‘her’ team win or lose.

In retirement, Ruby and Dennie took pleasure in traveling the US and other parts of the world together, meeting up with old friends and making new ones. From childhood, Ruby loved being in the kitchen. She was a skilled cook and baker, and passed down the cooking bug to her children and granddaughters. Ruby loved spending time with her family, and the holidays were her favorite. She was notorious for her Halloween pranks and took great pride in spooking trick-or-treaters.

Before Dennie passed in 1995, he was reunited with his old friend and WW2 crew-mate Mel Derry and wife Ebby. They remained close friends and the couples would visit each other on opposite coasts. After the passing of Dennie and Ebby, Ruby and Mel maintained a friendship. Eventually Mel came out to Washington to visit Ruby, and never left her side. For years they would split their time between Ferndale, Baltimore and Columbia City, Indiana. Ruby and Mel remained partners until Mel’s passing in October of 2019, joining two families forever.

As the matriarch of the family, Ruby leaves a legacy to be remembered. Her thoughtful, nurturing, and authentic nature touched many lives. She had a vigor for life that compelled her to love deeply, laugh often and to always count her blessings.

A family grave side service will be held at Green Acres Cemetery and a celebration of life will be held at a later date. In lieu of flowers, please send donations to Whatcom Hospice House, (2806 Douglas Road, Bellingham, WA 98225) in Ruby Flaherty’s name. The family would like to thank everyone for their kindness, thoughts and prayers.

To order memorial trees or send flowers to the family in memory of Ruby Beatrice (Geiger) Flaherty, please visit our flower store.