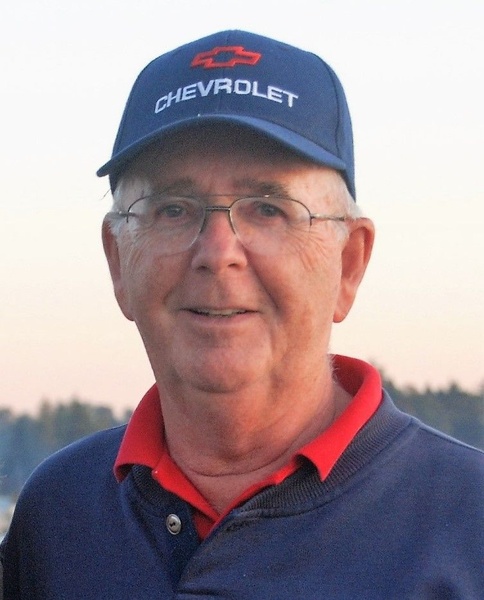 Roger Charles Anthony went to be with his Lord and Savior in the early morning hours of December 20, 2021. He was born at Swedish Hospital in Seattle, WA on January 1, 1941 to Charles and Helen Anthony (Richards). As a young child Roger spent time with his extended family in the Richmond Beach area before his parents relocated the family to the Bellingham area. Roger and his older brother Rich started school and soon had a neighborhood full of friends stopping by their house after school to play and eat their mother’s homemade treats. Roger graduated from Bellingham High School in 1959 and enrolled at Western Washington University to become a teacher. He joined the Army and did his basic training and active duty at Fort Ord, California. He spent six years serving in the Army National Guard Reserves. He married the love of his life, Roxi Leanne Pazaski on September 7, 1963. They welcomed their daughter, Lyndsi in 1965 while he was studying for his final exams. Roger received his bachelor’s and master’s degrees in Education from Western Washington University in 1966 and 1975. They had second child, son Bryce in 1969, and two weeks later Roger left to start his first teaching position back in Silver Springs, MD. His wife, Roxi followed two weeks later with their three-year-old daughter and newborn son. While living in Maryland they enjoyed taking weekend trips to the US capital and surrounding historic sites. The East Coast beaches were one of their favorite getaways. Upon the family’s return to Washington in 1970, Roger was offered a teaching position at Everett High School and ended up staying 27 more years! The family bought a house in an Everett suburb, now known as Mukilteo and made that their home. They welcomed their third child, son Kyle in 1975.

Roger had a deep love for the water, he loved to swim, boat, fish, water-ski, race hydroplanes and was in the Sea Scouts. One of the things he looked forward to all school year long was when he would take his family on a six-week vacation sailing throughout the San Juan Islands.

Some of Roger’s favorite things were watching sports on TV, especially football and baseball. The Seahawks, Huskies and Mariners had a loyal fan! He loved to yell at the TV even though he knew his team couldn’t hear him! Roger loved cherry and lemon meringue pie, oatmeal raisin cookies and home-canned peaches. He would order lemon custard and vanilla ice cream when the family would stop at Baskin-Robbins after church! Who orders vanilla ice cream when you have 31 flavors to choose from? Any kind of seafood especially freshly caught Dungeness crab and salmon were some of Roger’s favorite dinners, especially when he’d catch it himself!

The travel bug bit Roger in the early 80’s so he and Roxi took their first trip to Europe with Rick Steves. They were hooked! Roger and Roxi ended up being chaperones to a large group of Everett High Schoolers a few years later and travelled extensively throughout Europe a number of times over the years with family and friends. When Roger retired from teaching in 1997, he and Roxi became “snowbirds” and headed down to their vacation home in Apache Junction, AZ each Fall. Roger would always say that by the end of the third solid day of rain, his suitcases were packed, and the car warmed up! Roger loved to golf and play billiards and poker with their friends down in AZ. They went south every winter for over 25 years, always returning to the same park.

When they returned in the Spring, they would start hosting the family get-togethers at their condo in Birch Bay. You knew if there was a party between Memorial Day and Labor Day, it was going to be at the Anthony’s. Spending quality time with good friends, family and high school classmates, boating, fishing, and crabbing were some of Roger’s favorite pastimes.

Roger will be remembered as a mild-mannered, gentle soul. He never rushed around or raised his voice. He was a beloved teacher and often had past students stop by the high school to say hello. He was a man who quietly gave back, whether it was giving a student a ride somewhere, or lunch money, helping coach one of his kid’s sports teams, or giving to his church. He and Roxi had exchange students and even became foster parents to a troubled high school youth who needed a place to live while trying to finish high school. He was a man of few words, but his kids knew that when he made up his mind, that was it.

Roger was preceded in death by his parents, Alfred Charles and Helen Anthony (Richards). He was survived by his wife Roxi Leanne Anthony (who has since passed away on 1/8/2022), his three children and their spouses, Lyndsi Stickles (Dennis), Bryce Anthony (Leanne), Kyle Anthony (Emily) and three granddaughters, Erika Brown (Josh), Hailey and Sydney Anthony. Roger is also survived by his older brother, Richard Anthony (Penny) and numerous cousins.

He will be laid to rest at Enterprise Cemetery on Monday, February 21, 2022, at 1:00pm along with his devoted wife of 58 years, Roxi Anthony. A celebration of life service to follow at Birch Bay Bible Community Church in Blaine at 2:00pm.

The family would like to express their heartfelt thanks to the entire staff of the Whatcom Hospice House in Bellingham for taking such wonderful care of Roger in his last days. He was treated with the dignity and respect that he deserved. In lieu of flowers please consider making a donation to the Whatcom Hospice House or a charity of your choice.

The following information is being provided so that individuals can be prepared to protect themselves at the various venues while honoring Roger:

Graveside – Given that this will be outdoors, there will be no expectation for masks to be worn. As always, if individuals choose to wear a mask, that will be fine as well.

Church – Signs will be posted requiring all guests to wear masks while in the sanctuary regardless of vaccination status. Masks and hand sanitizer will be available.

Church Fellowship Hall – After the Celebration of Life service, there will be light refreshments served. Please follow current restaurant guidelines.

To order memorial trees or send flowers to the family in memory of Roger Charles Anthony, please visit our flower store.
Send a Sympathy Card