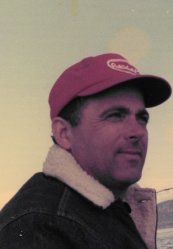 Robert “Bob” Davis Stone passed away at his home in Everson, WA on July 22, 2019, at the age of 91. He had been living with congestive heart and respiratory failure for many years.

Bob was born to William and Gladys Stone on May 28, 1928 in Bellingham, WA. He married Virginia “Ginny” Fosmo on September 30, 1949, and they shared 65 wonderful years together before her death in 2015. While Bob worked as a truck driver for many decades, his true career was helping others learn the truth about the Bible. He was baptized as one of Jehovah’s Witnesses in 1950, and he spent the remainder of his life dedicated to preaching and teaching the word of God. He was especially fond of the Bible’s promise of a resurrection, cherishing the thought of being reunited with his dear wife on a beautiful paradise earth.

In his downtime, Bob could be found spending time with his family, fishing and boating, completing puzzles, watching Westerns, or working on projects around the home. He was gifted with a nice singing voice, and in his younger years, he would often sing at weddings while Ginny played the piano and joined him in singing as well. Bob also had quite a knack for writing poems and riddles, and was known for his goofy sense of humor. He had an infamous sweet tooth, and never met a cookie he didn’t like.

Bob was preceded in death by his loving wife, Ginny, and his beautiful granddaughter, Angela. He is survived and will be missed by his three children: Teri (Mark) Johnson of Everett, WA, Brad (Vicki) Stone of Everson, WA, and Shelli (Jeff) North of Bellingham, WA; 8 grandchildren; and 6 great-grandchildren. There will be a memorial held on Saturday, July 27th at 2pm at the Kingdom Hall of Jehovah’s Witnesses, located at 8075 Goodwin Rd. Everson, WA 98247.

To order memorial trees or send flowers to the family in memory of Robert Davis Stone, please visit our flower store.
Send a Sympathy Card