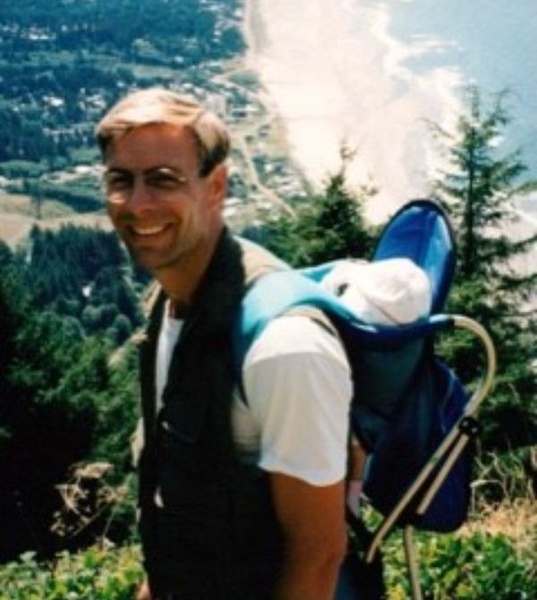 Rick B. Benson, scientist, bike racer, best dad ever invented, husband, son, brother, uncle, and friend, was tragically taken from us on February 6th, 2022. He was doing what he loved. Out enjoying his cabin time, working in the woods, he was struck while cutting down a tree. He was 61.

Born in Roseville, California, just outside of Sacramento, Rick spent his early years living in many different states as the child of an Air Force family. He spoke the most about his childhood memories from California, Oklahoma, and Cape Cod, and fondly remembered the times he would camp on Fish Lake in Washington with his dad and brothers. Rick graduated from the University of Washington with his bachelor’s degree in Geology, having paid his way through college by working the night shifts at the UW hospital and managing his apartment’s building in Seattle. He started his career as a research scientist at the Pacific Northwest Seismic Network, where he was introduced to his passion for field work while working on Mt. St. Helens during its eruption in 1980. He helped set up what was, for a long time, the highest seismic station on Mount Rainier. For the last 29 years, he served the seismology community as the Director of Operations at the IRIS DMC. There, Rick tirelessly promoted the concepts of freely open and accessible scientific data. He helped to organize and teach at numerous workshops around the world, training seismologists from dozens of countries in the tools and techniques of open international data exchange. Rick traveled to six continents sharing his knowledge with the world’s seismologists during his long tenure with IRIS. Always available to lend a hand, share his experience, or be a good listener, Rick was the go-to person at the DMC to make things better for his staff. When things were broken, it was Rick that usually volunteered to fix them, always with an infectious smile on his face. At work and at home, Rick made things better for everyone.

Rick loved his family more than anything. He was a proud father to his daughter Hannah, who was his world. Even though she lived for many years on the other side of the country, he was always in communication with her, sending her messages to remind her of how much he loves her. He once took her climbing to the top of Mt. Baker, and when her knee gave out part way down, he carried her the rest of the way down the mountain. Every time he did something selfless for his daughter, he always reminded her that he was only doing it “Cuz I love you.” Rick was a loving husband and partner of 32 years. We were a great team. From the projects of remodeling our homes and building our cabin, to our adventures in traveling and cycling. I will miss hearing “Pot Pie!” and my big bear hug every morning.

A generous friend, co-worker and neighbor, Rick leaves behind a void like no other in so many people's lives. He was the most loving, kind, caring, and giving person. He always greeted everyone with his bright white smile and funny jokes. He had endless energy to go around. He loved to help everyone. If anyone even mentioned a project they were about to start, the conversion instantly became “we can do…” (I think you all know what I am talking about). Rick did so much for so many–he was the "fix it" guy–and he wasn't afraid to do anything. Because of that, he was a real inspiration to his brothers. As a team, they accomplished much more because of him. He deeply loved riding his bike and the community of friends that he built bike racing and road riding with over the years.

Rick was known fondly by several names, but gave out even more nicknames to those he loved. There was “Waldo” (as in Where’s Waldo?), for how he would slip away from a group setting to wander and explore until no one knew where he had ventured off to. So many times someone would talk about a city or country and Rick would say “Oh I lived there,” or “I’ve been there!” There was “Ranger Rick,” for his love of the outdoors. He always wanted to be biking, hiking, camping, and most of all building a giant fire to sit by just so he could smell like campfire smoke. He was “Second Dad” to Hannah’s best friend Nicola as he created a family out of his long-time friends. Rick had silly nicknames for everyone he cared about, and often used his own made-up words in everyday conversation, sometimes to the point that only those he was closest to could fully understand what he meant.

Rick is survived by his wife Diane and his beloved daughter Hannah. He is preceded in death by his father John and brother-in-law Larry, and survived by his mother Jan Gannett, his brothers John, Don, and Shannon, sisters-in-law Debbie, Darise, Sue Ann, and Lynette, and brothers-in-law Kurt and Gerry. He is also survived by his nieces and nephews, grand-nieces and grand-nephews, and friends whom he considered family.

We will hold a Celebration of Life for Rick in late spring or early summer 2022. We will distribute further information about plans as they become available.

This obituary was written by Hannah Benson and Diane Thomas with contributions from Rick’s colleagues and family. Please leave your own messages and memories of Rick on this page for us all to remember him better.

To read more, friends and colleagues from Rick’s work have written their memories at https://www.mykeeper.com/profile/RickBenson/ in addition to here.

To order memorial trees or send flowers to the family in memory of Rick B Benson, please visit our flower store.