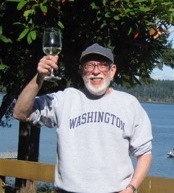 Richard Joseph “Dick” Parker, passed away at home on July 19, 2017, at the age of 77.  He was born December 9, 1939 in Gig Harbor, WA, to Joseph William Parker and Ruth May (Hains) Parker.  The family lived in Vaughn, WA, until Dick’s father was discharged from the US Army in 1945, at which time they moved to Bellingham.  Dick attended Franklin School (now the site of Franklin Park), Whatcom Middle School and Bellingham High School, graduating in 1958.  One of his favorite memories was marching with the high school band at the Pasadena, CA Rose Parade.  He graduated from Western Washington State College (now University) and worked in advertising sales for The Bellingham Herald.

Dick married Gwen Toedter on June 21, 1970 in Bellingham.  In late 1972, they moved to Roseburg, OR where he worked for the Roseburg News-Review.  Through the years, he worked in advertising sales and management for several companies, including the Seattle Post-Intelligencer, and the Vancouver, WA Columbian, as well as wholesalers American Strevell and Central Garden and Pet Supply.  He and Gwen returned to Bellingham in 2006, and made their home in Sudden Valley.

Dick enjoyed gardening, home improvement projects and cooking.  For most of their married life, Dick and Gwen would gather with a group of dear friends at least once or twice a year to cook a gourmet meal, celebrate birthdays, and talk politics, movies, plays and books.  He developed a love of bird-watching, and kept the feeders full.  He loved the fact that both his children, Hilary Parker and Aaron Parker, and his two grandchildren, Helena and Joseph Singer, lived close at hand in Sudden Valley.

He was a devoted father, actively caring for son Aaron, who is developmentally disabled and continues to live at home as an adult. He instilled in both his children a love of music and appreciation for good cooking.

Some of Dick’s closest friends from school days and early years at the Herald, were taken too early.  They included Don Wenke, Bob Peterson, and more recently, Stan Chen and Bill Moultray.

Dick is survived by his wife, Gwen, children Hilary and Aaron, and grandchildren Helena and Joseph, as well as the descendants of his half-sister, Genevieve Thurman, who predeceased him.

A celebration of life will be held at a date still to be arranged.  Memorials are suggested to Whatcom Hospice or End of Life Washington.

To order memorial trees or send flowers to the family in memory of Richard Joseph "Dick" Parker, please visit our flower store.