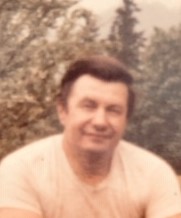 Rene Charles Vitali was born in Hussigny, France on March 10, 1934. He grew up during World War 2, seeing the effects of war and the toll on the friends and family around him. He moved to the USA with his parents and sister when he was 14 and attended Ballard High School in Seattle.

Rene married his high school sweetheart, Janet Lindgren. They were married 69 years and raised 6 children. They lived in Ballard for many years until moving up to Whatcom County where they had property along the Nooksack River.

Rene became a boilermaker and worked at Washington Iron Works for many years until it closed. He then worked for Young Metal before retiring and moving to Whatcom County.
Rene was a do it yourself kind of man. There was nothing he would not fix. He was not a man to sit idly and watch TV. He even built a cabin cruiser in his back yard, never having sailed a boat. The family enjoyed many week-ends in the Puget Sound with the boat, fishing and exploring. He was always there to help solve problems or fix things. He loved music, especially accordion music and polka dancing.

He loved camping and nature. He instilled that love in his children with the many hikes and camping that they did.

We enjoyed many happy times with dad, the dart gun wars, the night time hide and go seek, and card games. Lots of love, lots of laughter.

Rene loved animals, especially dogs. He often dog-sat his family’s dogs and it is said that once dad started feeding them in his “luxury dog hotel”, the dogs did not want to go home. It was true.

The family would like to thank Robert Vitali and his wife, Stephani, for graciously opening their home for our father and mother while he was in hospice. We also thank the hospice people who helped during dad’s last days. He died peacefully in his sleep. And last, we thank a wonderful man for all that he did for his family. RIP, Dad.

To order memorial trees or send flowers to the family in memory of Rene Charles Vitali, please visit our flower store.
Send a Sympathy Card