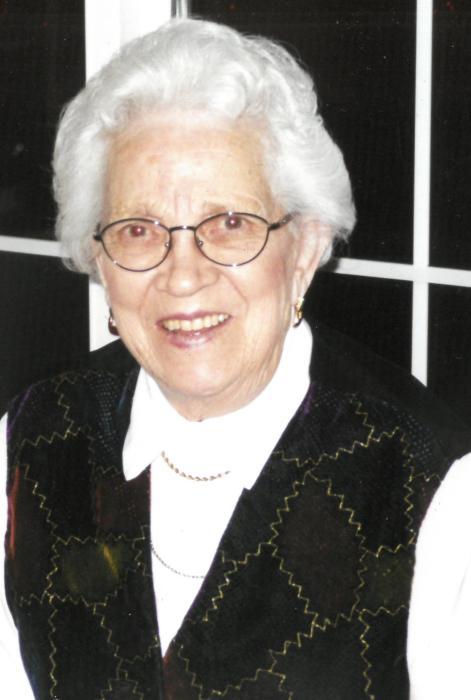 Ramona Noteboom, age 98, of Lynden passed away Sunday, April 30, 2017. She was born May 24, 1918 in the Assink farm house on West Main Street in Lynden, WA to Klaas and Grace (Hulst) Dykstra. The family moved back and forth from Iowa a couple times.  She went to school through the 8th grade in the Hospers, Iowa area, and in 1936 the family moved back to Lynden to stay. As a teenager, Mona accepted the Lord as her personal Savior and made First Reformed Church her church home. She was very involved in girls’ league, choir, and was an original member of the Women’s Choral Group called the Nonette, along with her sisters Margaret and Wilma. She attended many women’s conferences, was involved in Caleb activities, and was ready to help out in many ways. She continued to have a deep faith all of her long life.

Ramona married Woodrow Noteboom Oct. 1, 1953 in Lynden.  Over the years they enjoyed many fishing trips, dinners, and card games with friends and family. Ramona enjoyed being hostess in her home. She had a good sense of humor and loved telling jokes and playing tricks on people.  Mona had many places of employment during the years before she married at the age of 35. She worked in the cannery and did housework until she got a job in the grocery department at the Lynden Dept. Store. Then Dr. Farley asked her to be his dental assistant and she worked for him for 10 years. He taught her, and she was quite proud of the fact that she even had to extract one of Dr. Farley’s teeth. When he retired, she worked at Charles Haan’s small appliance store.  After she attended Bellingham Business School, she worked for Farmers’ Equipment Company for 24 years.  When she retired, she wasn’t ready to slow down, so she worked at Cedar Springs as a waitress. During these years, she also took several overseas trips.

Mona and Woody had no children of their own, so they decided to buy “Pop’s” property which was right next door to her sister Wilma, and husband Wilbur, who had 6 children.  Mona and Woody thought it would be nice to help out and share the kids, and that they did! Jed, Jerryl, Nancy, Mark, Jana, and Kurt had the blessing, joy, and fun of having Aunt Monie and Uncle Woody to share everyday life with!  Also involved in their lives were numerous nieces and nephews and friends, beyond counting!! Ramona was preceded in death by her husband, Woodrow Noteboom, having had a short but well and happily lived marriage of 15 years.  Also preceding her in death were her parents, her brothers Ben and Henry, sisters Stella, Tracie and Wilma Langstraat, Anna Assink and Margaret VanZee.  She is survived by her sister, Marie Smith, of Spokane, and her numerous nieces, nephews, and greats! Mona loved to be busy; if something was broken, she’d head out to her shop and figure out how to fix it. As a young career person, she would go to the river to fish before work in the morning. She also usually had a house cleaner, so that she could spend her time in the yard, where she kept it well weeded, raked, and mole-free! She was once coerced into dancing on the table at a luau, although the picture of that disappeared from her album after we teased her about it. She had multiple groups of friends, and she and her sisters had wonderful relationships.  Mona will always be remembered for her kindness and fun loving attitude, her sweet smile and the twinkle in her eye. The family of Ramona would like to thank Lynden Manor, Christian Health Care and Among Friends Adult Family Home for their loving care of her over these last few years.  A time of visitation will be Wednesday, May 10, 2017 at First Reformed Church, 610 Grover St., Lynden from 4 to 8 PM. Graveside service will be held Thursday, May 11, 2017, 1:00 PM at Monumenta Cemetery, Lynden followed by a memorial service at First Reformed Church with Pastor Ryan Bajema officiating.  Family suggests memorials be made the First Reformed Church.

To order memorial trees or send flowers to the family in memory of Ramona Noteboom, please visit our flower store.
Send a Sympathy Card