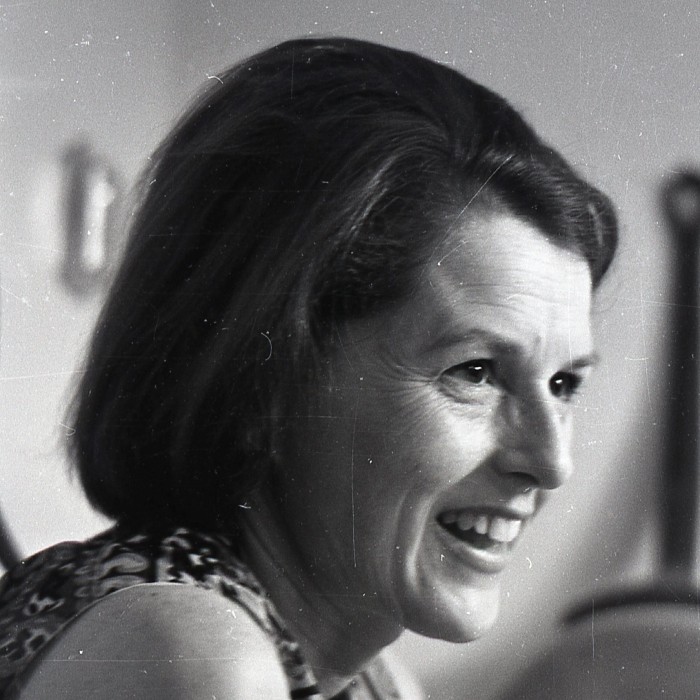 Paule Kelly was born on February 5, 1925 in New York City and grew up in Stamford, CT, the only child of Harold W. and Marjorie (Booth) Browne.  This idyllic location provided her with unfettered access to the beauty of Long Island Sound as well as the opportunity for adventures with her father on the local pond and throughout the parks of their charming New England town.

After graduating from Stamford High School, Paule spent time working and starting a career in the City, commuting daily into Grand Central Station.  In addition, she worked as a camp counsellor in Lake George, where she was recruited to represent New York State in the Miss America Pageant.

She met Merrill E. Kelly in December 1944 when he was going through training at the Naval Submarine School and she was a student at Connecticut College for Women in New London, CT.  Married five weeks later in San Diego, CA, it was the start of a 65 year marriage, highlighted with travel and adventure.  From Europe to the Far East, Paule and Kel would always say: ‘We took the scenic route’, immersing themselves in whichever culture they found themselves in.  Whenever stateside, they would escape with the kids towing a trailer to whichever interesting destination was within reach. French became her second language and she even developed a proficiency in Mandarin Chinese.   Paule was an active Navy wife, who supported Kel’s career while raising their four children.

They retired to Bellingham, WA in 1973.  The next 37 years together were spent living in their comfortable house on a hill overlooking Puget Sound.  A single weeping willow tree waved its glorious arms at visitors as they arrived.  Like her mother, she nurtured her garden.  She also spent summers on Puget Sound in their cherished boat ‘Sea Dog’, trolling for salmon, crabbing and clamming.  Through their travels, Paule became a gifted cook who loved to entertain her family and friends.

Paule loved to write, either corresponding with family and friends or simply journaling.  She was a genealogy buff – successfully documenting the origins of her family back 300 years.  She cared deeply for her children, grandchildren and great grandchildren.

Paule was preceded in death by her husband in 2010 and her daughter, Robin (Bitsy) L. Merenda Gautier, in 2012.  She is survived by her children Roni B. (husband John) Almon of Parker, CO, D. Scott (wife Carol) Kelly of Vance, SC, Steven M. (wife MaryAnn) Kelly of Pensacola, FL, son-in-law Robert H. Gautier of Bellingham, WA, 13 grandchildren and 17 great grandchildren.  Graveside services will be held at 11:00 a.m. Saturday, November 17, 2018 at Sunnyside Cemetery, 90 Cemetery Road in Coupeville, WA.

The family is grateful to the management and staff of Brookdale Fairhaven Assisted Living Center for the tender loving care provided to our Mother over the past 4 years.  We are also thankful for the compassion and care provided by the angels at Whatcom Hospice House. In thanks for all that they have done, in lieu of flowers, please send donations to Whatcom Hospice House, 2806 Douglas Ave., Bellingham, WA 98225.

To order memorial trees or send flowers to the family in memory of Phyllis "Paule" Kelly, please visit our flower store.
Send a Sympathy Card