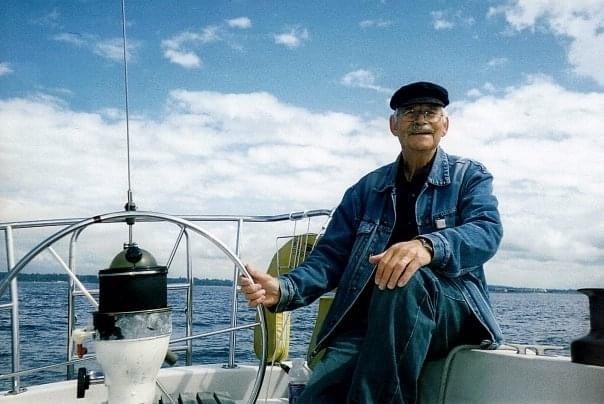 Peter G. Bjorklund "Pastor Pete" Where does one start? The pen will run out of ink long before one can finish defining this man. Our father was born March 22, 1930 and died peacefully Monday, August 23, 2021 in the early morning. Born in Terjarv, Finland, he grew up working in forestry and his father's lumber mills. A slight build but athletic man, always interested in track and field and cross-country skiing. He was gentle but competitive with the heart of a lion. In 1959, he travelled to America and settled in Olympia, Washington. His wife Martha arrived a year later, and they married in 1960. Between 1962 and 1969, they were blessed with six children: Maria, Tom, Matts, Carl, Susan and Mark. During this time, Dad earned a degree in Chemistry and later went to work for St. Regis and then had a lengthy career with the Weyerhaeuser Corporation. He was part of a seven-man team that was competing with several other global companies to create the first chlorine-free pulp and paper processing plant in the world. By the late 1970's they achieved this victory. Dad raised us with a strong biblical foundation and a personal relationship with Jesus Christ. The gospel truth. He was very loving and devoted to us children and imparted a strong work ethic. We all owe our strong work ethic to his leadership and example. In 1982, he quit his job and went into full-time ministry pastoring a small church. He also spent a few years smuggling bibles into communist China. He spent decades studying biblical theology, learning Hebrew, Greek and several other languages. There are so many words and paragraphs and stories that could be told to describe our father, but maybe simplicity is the best. He was humble, He walked with God, He was a glowing aura of love and kindness. A disciplined and accurate man. He came with nothing and left with nothing but gave us everything. Money meant nothing to him. He had hope, joy and salvation. That was enough. He will be dearly missed by all. Genesis 5:24 "And Enoch walked with God: and he was not; for God took him." A Celebration of Life will be held at 1:00 PM, Saturday, September 25, 2021at the Squalicum Boathouse, 2600 N. Harbor Loop Dr., Bellingham, WA 98226.

To order memorial trees or send flowers to the family in memory of Peter Goran Bjorklund, please visit our flower store.
Send a Sympathy Card