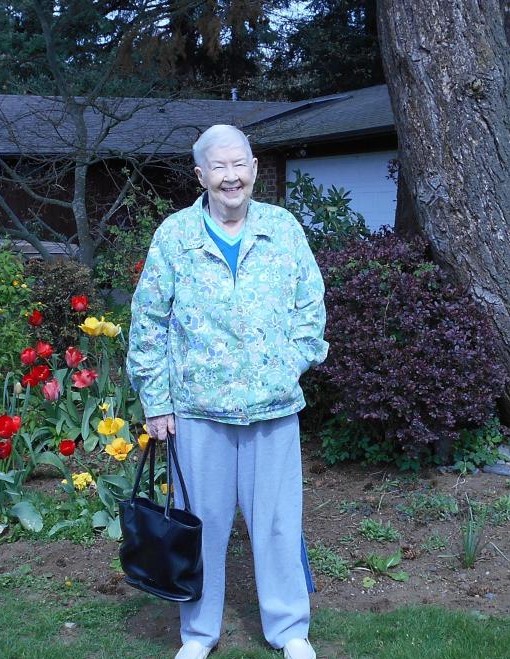 Patricia Alene McDonald passed away on Thursday September 29, 2016 at her home in Lynden. She was born in Bellingham on December 15th, 1923 to J. Ivan McDonald and Iva (Gilfilen) McDonald.
She was preceded in death by her mother in 1962 and father in 1971; grandparents R. Edgar Gilfilen in 1943, Alpha (Leadmon) Gilfilen of Silver Beach-Bellingham, WA in 1953, James McDonald in 1922, and Nellie (Patterson) McDonald of Clipper, WA in 1953; sister Jacqueline Sue Burt in 2007; brothers James Patterson McDonald in 2012; and nephew Danny Maultsby in 1999.

At age 17, Patricia entered college at Seattle University, later graduating from the University of Washington. She began her career in the field of medical records, working in various hospitals,  and health facilities thru-out western California. She retired from UCLA Medical Center as a Medical Records Administrator in 1994,  retiring to Whatcom County at her home in Lynden.

Patricia was the great-granddaughter  of James Patterson, a first settler in Lynden and founder of Whatcom County's dairy industry and; Elizabeth, the daughter of Chief PatKanim of the Snoqualmie, one of the most powerful native leaders in western Washington in the 1850's.

Patricia, a very independent and strong woman, never married or had children. However she had many friends and acquaintances throughout her career in California and her retirement in Lynden.

At her request there will be no funeral. A gathering of friends and family will be held at a date announced later.  Cremation arrangements by Sigs Funeral Services, inurnment at the family plot at Bayview Cemetery Bellingham, WAPat's favorite charities were the American Diabetes Association and the American Heart Association. There will be a memorial service held at Pat's home on Saturday, October 29th from 1:00pm to 3:00pm.

To order memorial trees or send flowers to the family in memory of Patricia Alene McDonald, please visit our flower store.
Send a Sympathy Card