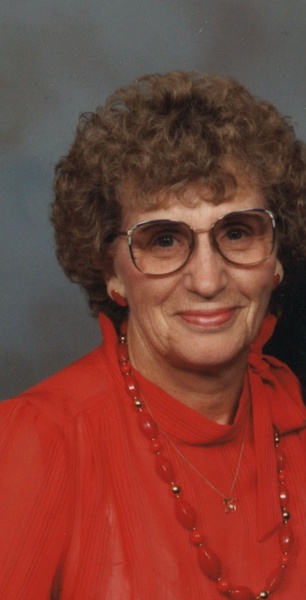 Minnie Sterk-Kalsbeek-VanderPol was born in Stickney, South Dakota on December 23,1926 to the parents of Frank and Johanna Sterk. Minnie was the second oldest of 7 children. Her siblings were Martin, Gerrit, Gertie, Jesse, Rickie, and Johnny.

The family moved to Artesia, California in 1937 where they lived on a dairy farm. Minnie attended Bellflower Christian School.
In 1941 the family moved to Washington along the Canadian border, in the Northwood area. She spent a year at home after the 8th grade. Minnie worked for Harvey and Clara Sterk when their children were young. Minnie went back to school attending Lynden High School for a couple of years before the family moved to the Everson farm on Main Street. Minnie transferred to the Nooksack High School where she graduated in 1945. In high school, Minnie was involved in the choir and was also a Majorette. Her talents there were twirling a baton and wearing a short skirt outfit. She worked at the Walker Grocery Store in Everson, until she met the love of her life, Morris Kalsbeek. Morris was a Navy man. They were engaged and then married on September 1, 1946. She was an amazing mother and homemaker, and all who had the pleasure to eat her food knew that she was an exceptional cook.
Morris and Minnie had 4 children together: Elvin, Larry, David, and Sharon. The family moved many times around the Lynden-Everson-Nooksack area until settling on a farm off the Vinup Road.
In 1970 a tragic accident took the lives of her husband Morris and son Larry. The community rallied around the remaining family and helped with the farm. Minnie went to work at the Christian Health Care Center as a cook for a few years. She and Sharon moved off the farm to Pine Street and the farm was sold.
Minnie met Mike VanderPol and the two were united in marriage on July 12, 1974. Mike brought 5 children to the marriage. Minnie loved Tony, Nella, Calvin, Michael and Mary all dearly. The newlyweds made their home on Conifer Drive in Ferndale. Minnie was a cook at the Senior Center in Ferndale. They moved to Bellingham when Mike retired from Copland Lumber and began his work on the farm with Minnie’s sons Elvin and Dave. During that time, they attended the Bellingham Christian Reformed Church. Mike and Minnie loved to travel and visit family all over the western United States. Mike was diagnosed with cancer in 2005 during this time Minnie’s daughter Sharon moved back to Washington. She helped her mom take care of Mike. When Mike passed away in 2006 Minnie began her move back to Lynden this time into a condo on Grover Street. There Minnie enjoyed going to the Lynden Senior Center and visiting her family and friends for coffee, cookies, and games.
Minnie moved one last time to Lynden Manor where she enjoyed many good years. She loved participating in all the activities, especially BINGO. She enjoyed winning BINGO and was proud of her prizes. She attended the gospel sing on Tuesday, Bible study on Wednesday, and she went to church every Sunday with Obe and Sharon.
In Minnie’s last years she was tired and would often say, “Why am I here?” We would respond, “You are here to Pray for your family!” And a prayer warrior she was!
In December, Minnie had a fall that sent her to the hospital, then to the hospice house where she was finally able to go be with Jesus in Heaven.
Minnie was a very joyful person who rarely complained. She was passionate about always spending time with family and friends. She never missed a birthday call, dinner, card, or song. She was devoted to celebrating each one of our lives. She had a wonderful life of 95 years. We will miss you Minnie, and you were loved by all! In lieu of flowers please send to the Whatcom Hospice House, 2800-2806 Douglas Road, Bellingham, WA 98225. As she would say, “Goodbye I love you so much.”
To order memorial trees or send flowers to the family in memory of Minnie Kalsbeek VanderPol, please visit our flower store.
Send a Sympathy Card