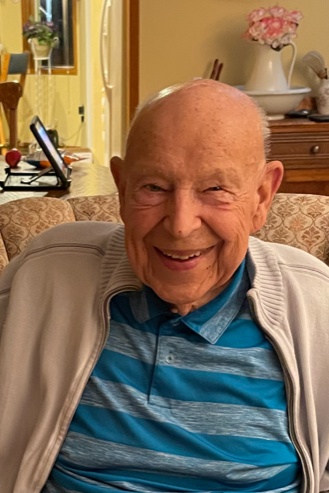 On April 10, 2022, Milton LeRoy “Bill” Canaan passed away in Bellingham, Washington after celebrating his 90th birthday surrounded by family earlier in the day.

Bill was the youngest son of William Levi and Elda Gertrude (Sykes) and was born in Aberdeen Washington. He grew up on a farm and, after graduating from Sunnyside High School, attended Yakima Valley Junior College and the University of Washington. Bill served in the United States Army during the Korean Conflict achieving the rank of Sergeant, and continued in the Army Reserve until his honorable discharge in 1960. While employed as an accountant by Tidewater Oil Company (Flying A) in Seattle, he met his wife-to-be Patricia Elsbree, who was a temporary comptometer operator at Flying A. They were married and blessed with four children.

Bill’s 20 year career with major oil companies included a relocation to California, however the family yearned to return to Washington State. So while vacationing in Bellingham, Bill applied for a job in the City of Bellingham’s Accounting Department and was hired. The family immediately returned to California, sold their home, said rushed goodbyes to family and friends, and returned to Washington in two weeks’ time—Pat pulling a full, open pickup truck behind a Ford van, Bill pulling a full, covered trailer behind a fuller U-Haul truck, and both sharing the load of yelling kids and yelping pets.

Bill’s hobbies and interests were numerous, including antique collecting, stained glass art, genealogy and tending his well-groomed, landscaped yard. However, family was most important to him. Bill was known for his positive impact on those around him—when asked, people who met or knew him invariable remember a good and kind man.

Besides his parents, Bill was preceded in death by his siblings, Inalee Nathlich-Kellough, Etta Mae Rice, Edith Brossard-Dixon and George Canaan; and his grandsons Brian Canaan and Bradley Young.

No memorial service or funeral is planned at this time. The family asks that in lieu of flowers, donations in Bill’s honor be sent to Whatcom Hospice Foundation, 2901 Squalicum Parkway, Bellingham, WA  98225 or other charity of your choice.

To order memorial trees or send flowers to the family in memory of Milton LeRoy Canaan, please visit our flower store.