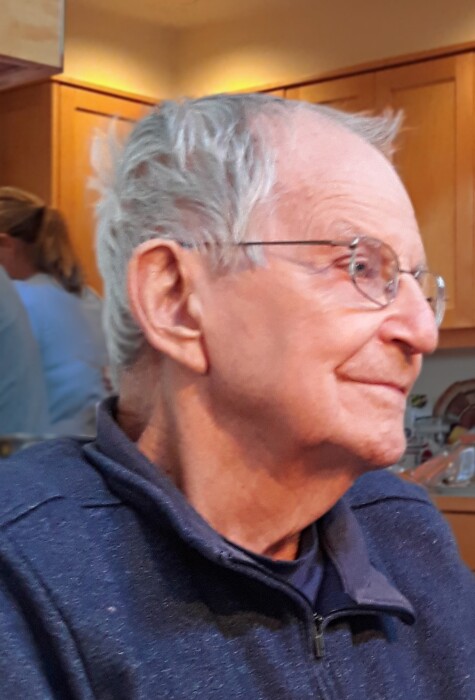 Merrill Embert Lewis, age 89, died at home with family after a long illness.  He was born in California in 1932 to Howard and Ida Lewis.  During the depression, the family of five moved to Baker, Oregon, where he initially lived with his immigrant Scandinavian grandparents, Hilma and Embert Fossum, growing up among a large family of aunts, uncles and cousins.  He was  influenced by a fine history teacher while in Baker schools. Later his family moved to McMinnville, Oregon, where he finished high school, before pursuing a B.A. in English and an M.A. in history at the University of Oregon. In 1954 he married former classmate Lorene Christensen. He taught at high schools and Oregon’s first community college, Central Oregon Community College, in Bend, before packing up family and heading to the University of Utah, where he pursued a Ph.D in English Literature with customary patience and persistence.  He joined the faculty at  Western Washington State College (now Western Washington State University) in 1968, a time of great growth for the college.  In the next 31 years his teaching and scholarship centered on 19th and early 20th century literature with emphases on American Studies and Western and Pacific Northwest literature.  He retired as Professor Emeritus.

Merrill applied the same patience and persistence to a developing avocation in retirement—wheat-breeding efforts he began with his son, a crop scientist, and which lasted the rest of his life.   He acquired acreage in the Skagit Valley, but his work took him all over the West, developing wheat and oat lines adapted to the rainy Northwest.  The best of his lines is named Edison (after the Washington town where early grain was imported to this area). The flour milled from that line can be found in local food coops and is used in the school lunch program in Eugene, Oregon.  His grains are also grown at the WSU Extension in the Skagit Valley and used at the Bread Lab, a project of the Extension, which provides classes for future bakers.

Always close to his much loved family, Merrill was preceded in death by his mother, Ida, and his brother, Bob.   He is survived by a sister, Marjorie Farness; his wife Lorene of 67 years; his children Melanie Lewis (Greg Cain), Hal Lewis (Kathi), Julie Domingo (Dennis-deceased), and Kelly Lewis (Todd Simmons).  He is also survived by numerous grandchildren, great-grandchildren, nieces and nephews.  The family thanks Merrill’s many caregivers, especially neighbor Cile Stanbrough.  At his request there will be no service, and family will observe a private memorial later in the summer.  In lieu of flowers, please consider a memorial donation to the Bellingham Food Bank, 1824 Ellis St, Bellingham, 98225, or your local food bank.

To order memorial trees or send flowers to the family in memory of Merrill Embert Lewis, please visit our flower store.
Send a Sympathy Card