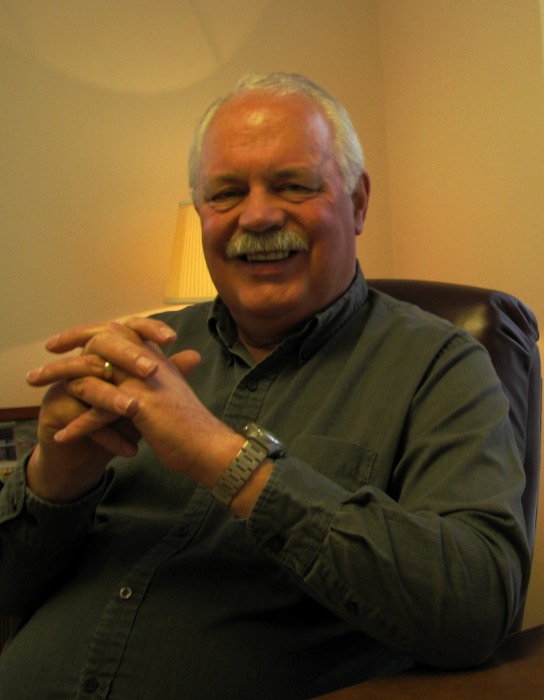 Mark Anderson, a long time Whatcom County resident and Realtor passed away Jan. 5, 2018 in Bellingham.  Mark was born May 4, 1943 in Seattle to Albert and June Anderson.  They moved to a home at  Cherry Point where he grew up with his three sisters;  Kaaran, Susan, and Jan.  After attending a one room school at Pt. Whitehorn for his elementary years, he attended Blaine Middle and High Schools where he excelled in athletics.  After graduation he furthered his education and football career at Central Washington.  There Mark was active in the Air Force reserves and received his degree in Park’s and Recreation.   Following graduation he earned a degree in Business.  During his years at college he met his first wife Karen, they had two children Eric and Wendy.  He then worked his way back to Whatcom County where he started his career in real estate as he opened Mark Anderson Land and Escrow Companies.   In 1990, he married Ellie Souve and he easily accepted her three children as his own.  Mark and Ellie continued the business together for the last 25 years.  Mark had many amazing attributes as a person.  He had the ability to blend with people of differing viewpoints and he exhibited great fairness in all of his dealings.   Mark was an incredible speaker, and during his time as State President spoke at many functions, and in front of the State Legislature and did some motivational speeches with Lou Tice  He was very fair minded and showed an enormous amount of common sense.  Mark was well regarded and respected within the community.  He felt that it was obligation and duty to give back to the community for what he had been given.  He had the honor and privilege to serve on many boards which included; WC Parks Commission, Whatcom Land Trust, he also served as President of the Washington State Realtors Association, President of the Bellingham-Whatcom County Board of Realtors and Vice-Chair of the Whatcom County Land Use Committee.    He also taught Real Estate Law at Western Washington University as well as Whatcom Community College. In his spare time, Mark was an avid Washington Huskies fan.  His Saturdays were arranged around those games.  Mark is survived by his wife, Ellie,  daughter Wendy of Alaska, step-children Roger (Shaun-Marie) Souve of Lynden, Melanie Souve (Scott Chisholm) of Denver, and Ryan (Teresa) Souve of Ferndale.  He also leaves behind two sisters, Jan(Brad) Brown, Sue Ranger both of Blaine, 2 nieces, Jessica(Mark) Sterk, Elisa(Jason) Nelson and nephew Jarrad Ranger all of this area, his  “Favorite Aunt Marj,”  and  two Cousins, Greg (Roxie) Rusing and Kim Rusing.  His eight grandchildren: Heather, Rachel, William (Kristina) Van Vleet, Mikayla (fiance’ Jarred Johnson), Courtney, Christopher, Keenan and Karlee and four great-grandchildren Parker,Logan, Hudson, and Kaden.   Mark was preceded in death by his son, Eric Anderson, his parents, Al and June Anderson, sister Kaaran Cannon and his uncle Jim Rusing.  We would like to give a huge thank you to the folks at Christian Health Care; the nurses, and the aides (especially Shone who took such good of Mark).   The support from the Nugent’s Corner Community was outstanding.  We also want to extend a very special thank you to best friend Michael and his brother John who have supported Mark and Ellie through the past few years.  To all who have sent flowers, cards, prayers and good wishes, we are very grateful for your kindness, thoughts and prayers.   The family would be honored to invite you to a celebration of Marks life which will be held at the Deming Log Show Museum, Saturday, July 7th at 1pm.

To order memorial trees or send flowers to the family in memory of Mark Andrew Anderson, please visit our flower store.