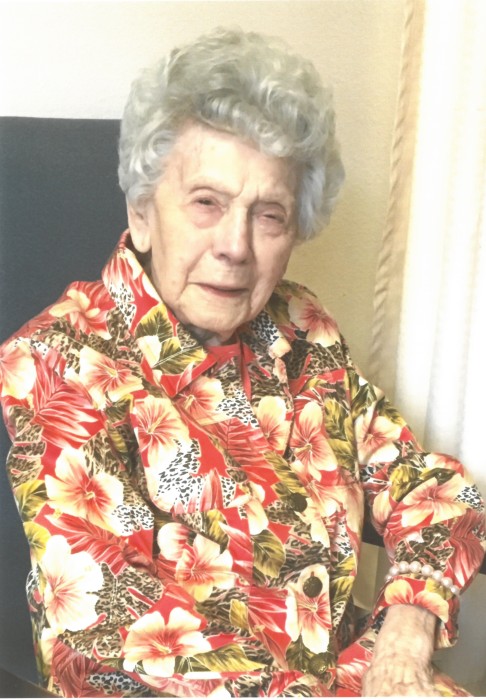 Marie Kison, 100, passed away on April 23, surrounded by the loving and caring staff at the Christian Health Center in Lynden. She was born on April 11, 1920 in Richmond, California to Frank and Mary Faria. She was the oldest of seven children and the last to pass away. She met Clarence Knutson of Bellingham in 1944 when he was in the Navy at Mare Island, California. She was a "Rosie the Riveter''. Clarence brought his bride back to his hometown in 1945. They settled down in Bellingham. She went to work for Newberry's in downtown Bellingham. Later she went to work for Sears on Cornwall until she retired in 1981. Everybody knew the "Lady of Sears". She worked the ready to ware, then the catalog department. Her many stories of working until 9 pm of Friday nights were classic and funny. Marie and Clarence spent many years dancing, and having a good time at the Bellingham Elks. He passed away in 1976. She then married Walter Kison in 1981. They also spent many hours at the Elks and Country Club and Yacht Club. He passed away in 2015. She spent the last five years of her life at the Christian Health Center having a good time with the staff and friends. She saw her children and grandchildren daily and weekly. She is preceded in death by her first husband Clarence, second husband Walt, three sisters and three brothers all from California. A stepdaughter  Floris of Seattle. She is survived her children, Ted (Sally) of Snohomish. Bob Knutson of Bellingham, Gene (Jan) of Bellingham, Toni Madeira (Joe) of Lynden. Six grandchildren and twelve great grandchildren. Marie loved life and her family, always being the organizer and gatekeeper of the family. "Mom, Grandma, we love you and miss you. All of us can say without you, none of us would be what we are today. Rest in peace until we see you again". Special thanks to the staff at the Christian Health Center for taking such great care of Marie.

A memorial mass will be held at Assumption Church at a later date.

To order memorial trees or send flowers to the family in memory of Marie Charlotte Kison, please visit our flower store.
Send a Sympathy Card