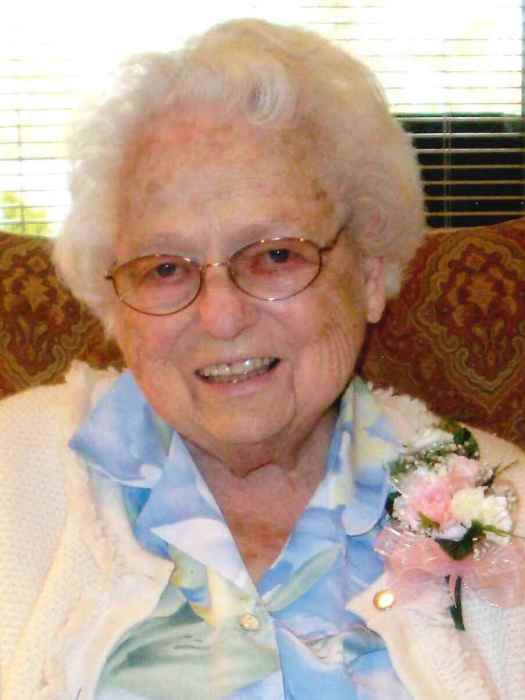 Mabel Rigina (Hawkinson) Karber, age 94 passed away peacefully on Sunday, November 29, 2015 at St. Joseph Hospital in Bellingham, WA.  She was born on June 26, 1921 at home in Whitehorn area of Blaine, WA to Emil and Corinne Hawkinson.  Mabel graduated from Blaine High School in 1939.  In 1937 she met John Karber from Ulysses, Kansas and they were married on March 22, 1940.  They lived in Kansas for almost five years before moving back to Whatcom County.  Mabel was an active member of Christian Women’s of America for many years.  She was also an active member of the Birch Bay Bible Community Church where she loved to quilt, and then later at Good News Fellowship Church where she enjoyed attending Bible Studies.  Mabel loved to entertain, was and excellent seamstress, loved to garden and painted beautiful pictures.  She now joins the love of her life John Karber (of 56 years), her daughter Sharon Karber, brothers, David Hawkinson, Clarence Hawkinson, Arthur Hawkinson and Carl Hawkinson, her sister Ethel Overrein and son-in-law Arvid Diemert in heaven.  She is  survived by her sister, Sylvia Jarman; children, Kory Diemert, John Karber (Mary), Carolyn Ganzini (Mike), Robert Karber, Jerry Karber (Sharon) and Lynette Pearce (Don); 11 grandchildren and 18 great grandchildren.  The family would like to thank the staff at Orchard Park Assisted Living for their love and care of our mother over the last two years. A celebration of life will be held Saturday, December 19 at 11:00 AM at Good News Fellowship Church, 1252 W. Axton Road, Ferndale, WA 98248 with a reception to follow.  Memorials may be made to the Lighthouse Mission, 910 W. Holly Street, Bellingham, WA 98225.

To order memorial trees or send flowers to the family in memory of Mabel Rigina Karber, please visit our flower store.
Send a Sympathy Card