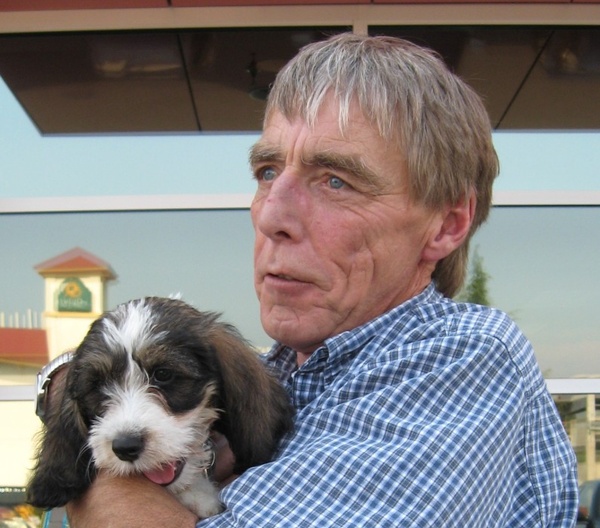 On Friday September 18, 2020 at 3:01 am Lynn Wesley Knutsen began a new journey that did not involve cancer and heart disease instead time with his Heavenly Father and his Loved Ones who had journeyed home before him.  He did ask for one more cup of coffee before leaving and told us that we would all be okay.  Born on September 28, 1953 as the fourth and final child of Audrey nee Mc Allister Knutsen and Wesley Knutsen he began his life in Ferndale and never moved out of Whatcom County.   Most who knew Lynn can attest to his humor, or at least attempts at humor, and his smile.  Those of us of the female persuasion loved those striking blue eyes looking out at us through those enormous shaggy eyebrows which his daughters wished he had not shared with them.  Being of Irish and Norwegian descent he had a tad bit of stubbornness which occasionally caused him a bit of trouble, but he had the most incredible empathy for all people and when he loved, he loved deeply and truly.  His faith was strong and if you became his friend he was in it for the long haul.  His greatest pride and joy were his daughters Carissa Knutsen (Brandon Shaffer), Molly Knutsen and his grandchildren Jace and Lily Knutsen.  He leaves behind his wife, Elizabeth Goplerud who did not get nearly enough time with him here on earth, his  daughters Carissa and Molly, grandchildren Jace and Lily, his oldest Brother Bryan (Tanna) Knutsen, Sister in Law Susan (Dale) Knutsen, nieces and nephews and many special friends including Ron (Corrine) Unick and Roger (Marcia) Newell.  He was preceeded in death by his Father Wesley Knutsen, Mother Audrey Knutsen, Brother Dale Knutsen, Sister Mary Knutsen, his Aunt Shirley Friesen and cousin Cindy.  We know there is a joyous reunion taking place. Due to Covid we are waiting to schedule a celebration of his life at a later time.  Memorials can be made in his name to the American Heart Association, American Lung Association, Whatcom County Hospice or to the Animal Rescue of your choice.

To order memorial trees or send flowers to the family in memory of Lynn Wesley Knutsen, please visit our flower store.