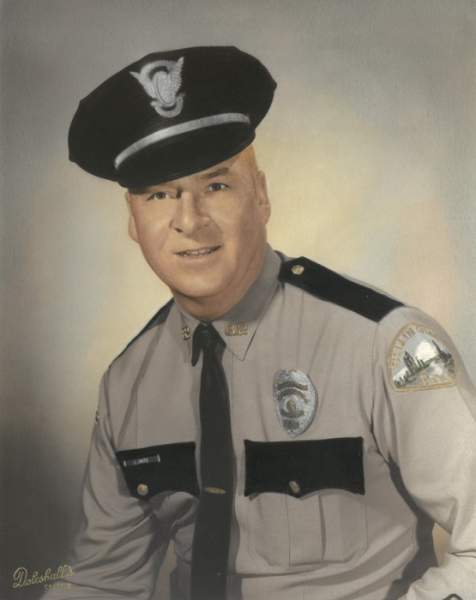 Lyle Raymond Smith, Sr., age 96, passed away, Tuesday, April 16, 2019 at his home in Everson.  He was born the seventh child of nine to Charles E. and Olive (Thompson) Smith in Bismark, North Dakota on May 3, 1922. He graduated from Mt. Baker High School with the class of 1942.  Also married Shirley A. Tiplin October 25, 1942 in Bellingham.  Then joined the Navy in February of 1943.  He was discharged as a Ship’s Cook Second Class in 1945.  He was a partner in “Bob and Lyle’s Restaurant and Tavern” in Everson, Washington.  Then in 1952 he joined the Bellingham Police Department and retired after 25 years, of which 13 years as a Motorcycle Officer and 12 years as a Detective.  During this time Shirley and he had Baker Creek Mobile Home Park built on the Telegraph Road in 1978 they retired from both and had a home built on the canal at Sandy Point Shores and enjoyed boating, fishing and hunting.  Having had a military family they spent time visiting them in Europe, Japan, Guam, England, Hawaii, Alaska and all except 11 states.  Spent 22 winters in Arizona.  He was a member of St. Paul’s Episcopal Church, Elks Club, Life Member of the DAV Chapter 19 and American Legion Post #7 and their Funeral Honor’s Squad for many years. He was preceded in death by his son, Gary Dale Smith and his daughter, Shirley Rae Scheidegger, 3 brothers and 4 sisters.  He is survived by his wife Shirley of 76 years; 2 sons, Lyle Raymond Smith, Jr. and Jeffery Lee (JoAnne) Smith; daughter-in-law Shirley Oswald, 15 grandchildren and 28 great grandchildren and 2 step great grandsons; sister, Peggy (Art) Broemeling and  sister-in-law Phyllis (James) Thomas.  And numerous nieces, nephews and other relatives. A funeral service will be held at St. Paul’s Episcopal Church, 2117 Walnut St., Bellingham, WA 98226, on Wednesday, April 24, 2019 at 12:30 PM, followed by a graveside service with Military Honors at 2:00 PM at Greenacres Cemetery in Ferndale. In lieu flowers please make donations to Whatcom Hospice Foundation in Lyle's name.

To order memorial trees or send flowers to the family in memory of Lyle Raymond Smith, Sr., please visit our flower store.