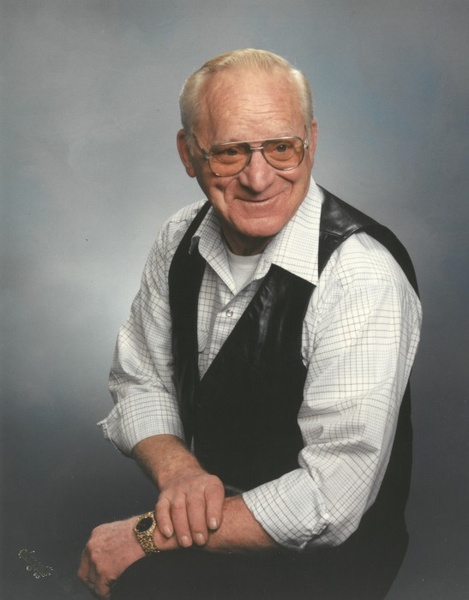 Lyle Clayton Dralle (Rusty), long time resident of Whatcom county, passed away peacefully at his home in Custer, WA on July 22, 2019. Born on Dec. 11, 1928 in Presho, SD, the 7th of 14 children born to Clarence and Hulda (Johnson) Dralle.  Rusty grew up and went to school in the Mission Hill, Gayville area of SD. He spent many happy days on the farm helping raise china polar hogs.  He graduated in 1946 from Gayville High School, where he played on a 6-man football team. Players wore leather helmets with no face guards.

In 1947 the family left SD and came out west to Bellingham WA, where his 1st job was picking strawberries.  Some of his early jobs were working at a cold storage plant, a chicken farm, and laying track for the railroad.  Rusty worked at Georgia Pacific pulp mill for 15 years.  He owned and operated Dralle’s Appliance Repair for many decades. His customers became his friends and always recommended his business to others.  The service van with “Here Comes Rusty” painted on the front was always a welcome sight.  He often worked long hours to repair a refrigerator or to fix the machines at the laundry mat.  Rusty even taught college students how to operate the washers including “wash more than one pair of jeans in a load”.  Always willing to help a friend, he ran Bellingham Towing which he eventually purchased and closed his appliance repair business.  He operated this one-man towing company until he retired at 78.

In 1950 Rusty married Myra Wells. They had 6 children and life was never dull. After David, Mike and Kenny were born and Myra pregnant with Beth Ann, they moved to a farmhouse, so they could save money by renting out their home on Patton St. It had water to the kitchen sink, wood stove to cook on and an outhouse. Somehow Clarence Smith’s pony joined them at the farm. The pony loved David but would nip and buck Mike off.

In 1968 Rusty married Sandy (Martin) LaFave, who had 4 children. Her children became his children. Rusty’s daughters have fond memories of camping trips with their dad, Sandy and her kids.

After retiring Rusty enjoyed spending time with family and friends, remained active, enjoyed working puzzles, as he had with his mother as a child, and reading. He showed us all he could still split wood, operate a tractor, and fix about anything.

He was an active member of Central Lutheran Church for many years and recently found his church home at Zion Lutheran in Ferndale.

He will be greatly missed by his family, extended family, and friends. He will always be remembered with a twinkle in his eyes, a smile, a story to tell, a helping hand to lend, and wisdom and common sense to share.

To order memorial trees or send flowers to the family in memory of Lyle Clayton "Rusty" Dralle, please visit our flower store.