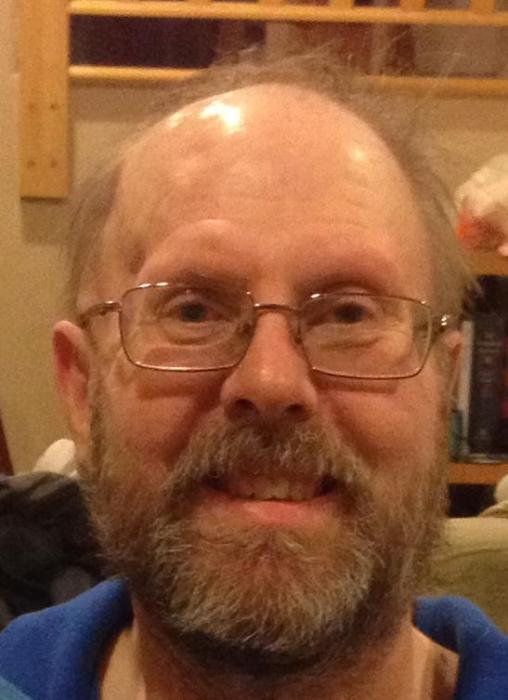 Louis Nims passed away peacefully at home on July 5, 2017. Born in Seattle to Geri and Burt Nims, Lou graduated from Bellingham High School in 1978. While attending WWU, Lou and his future wife Kimber made many lengthy camping trips across the United States and Canada. Working multiple jobs to put himself through school, Lou earned degrees in political science and electronic engineering. He found great fulfillment in joining the engineering team at Conveyor Dynamics, Inc., where his work as a senior instrumentation engineer was highly regarded around the world. Lou traveled a great deal for work and made lasting friendships with many people that he met, from drivers and security guards to the heads of large corporations. Lou treated everyone with respect - he was no elitist. Lou worked at CDI until he was no longer able to do so. When Lou was diagnosed with a glioblastoma multiforme brain tumor in 2/04, he was given 3-6 months to live. Following a protocol designed by the brain tumor center at Duke University in NC, Lou battled through 18 months of treatment. Thanks to great docs in both North Carolina and Bellingham, family support, a dose of good luck and an incredible will to live, this brain tumor warrior lived for an astonishing 13+ years after diagnosis - enough time to see his beloved sons graduate from high school, witness Tristan's graduation from Evergreen State College, Trevor's completion of his sophomore year at UW, and the birth of his beloved granddaughter, Winter. The family took many camping trips throughout the western United States in their series of VW vans, as well as an extended trip to Australia in 2007.  Lou had a special place in his heart for Silver City, Idaho, where many hikes were undertaken and memories made. Throughout difficult and joyful times, Lou's hallmark laugh resonated through the family home. He fiercely loved his boys. Lou was an intellectual sponge, eagerly seeking and sharing new learning in every conceivable field. He never tired of debating politics, religion, or any hot button topic of the day. Lou was a union advocate, animal lover, science believer, participatory democracy supporter, backgammon and Trivial Pursuit master, and rock and roll enthusiast. He loved Einstein's words, "The important thing is not to stop questioning. Curiosity has its own reason for existing." Proceeding him in death were his parents, Burt and Gerri, and his infant brother Timmy. Lou is survived by his wife, Kimber Langton; son Tristan Langton; son Trevor Nims; granddaughter Winter, brother Bob Nims; sister Laurie Barnett; sister Sheri Amir Soleimani; and many beloved nieces, nephews, in-laws and extended family. Private services will be held at a later date. Honor Lou’s compassion and spirit by heeding the inscription on the pedestal of the Statue of Liberty,

With silent lips. “Give me your tired, your poor,

The wretched refuse of your teeming shore.

Send these, the homeless, tempest-tossed to me,

I lift my lamp beside the golden door!”

Please consider donating/voting to support causes that help to lift up those in need.

To order memorial trees or send flowers to the family in memory of Louis "Lou" Edward Nims, please visit our flower store.
Send a Sympathy Card