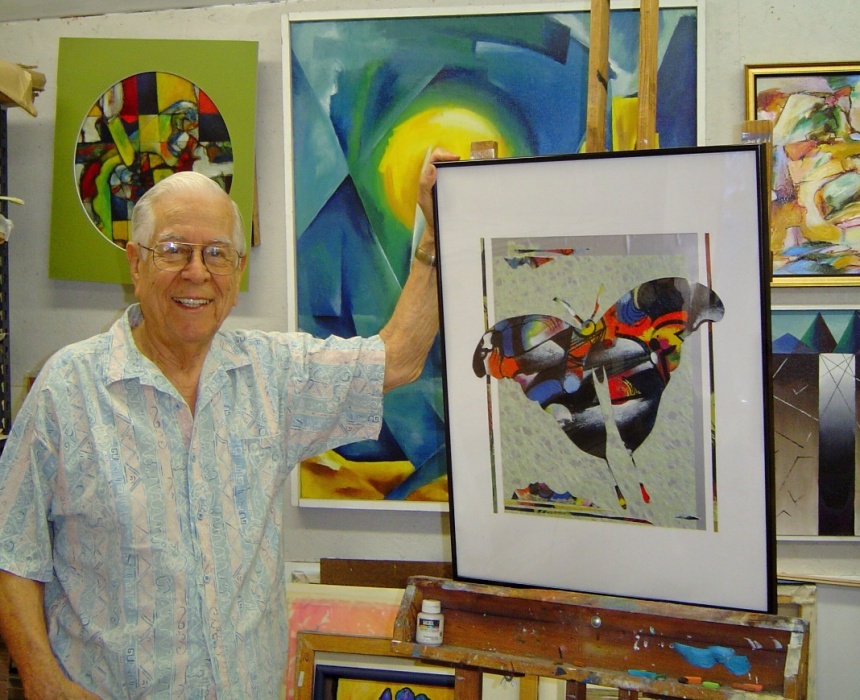 Les passed peacefully into the presence of our Lord, July 23, 2016, surrounded by loving family at the age of 97. He was predeceased by his parents, brothers and sisters, his wives' Xaneth (1967) and Marguerite (2011), both of Wenatchee, and granddaughter, Deborah (Smith) Mosset (2010) of North Dakota.  His life-long passion was art, which he mostly expressed through painting. This passion emerged during childhood, and he later developed his talent at the Bisttram School of Fine Arts and the Art Center Schools in LA. Thereafter, he began his career at Warner Bros. Studio, first working in the movie title division and later in the comic book division as an illustrator. His favorite illustrations included Bugs Bunny and Porky Pig. As an Army Staff Sergeant during WW ll, he was an educational specialist and taught commercial art to patients at Barnes General Hospital; he was also the entertainment director who planned athletic programs, directed army shows, musical programs and other activities for fellow soldiers. After the war, he returned to Hollywood, where he continued working in the film industry and with various independent commercial art designers. After graduation, from Biola College with a degree in Bible Literature, he relocated his family to Seattle in 1959, where he worked at King’s Garden for a short time, followed by interior design work at Bank & Office Interiors. In 1965, he moved to Wenatchee, where he worked for The Craftsman, Inc. and later started HG Designs with Russ Hepler. During his time at Craftsman, he designed the apple logo for the WA State Apple Commission and the logo for the WA State Wheat Commission. He continued to study new techniques with artists from Oregon to Vermont, always intrigued by innovative ways to incorporate texture, a variety of mediums and boldness of design and color . I n 1987, he was commissioned by the North Central WA Museum in Wenatchee to create a North American Slide Presentation. Because of the talented diversity of his art work, he was invited to exhibit in numerous shows and galleries from Wenatchee, Bellingham, La Conner, Walla Walla, and San Diego from 1973-2009. He was a member of the Two Rivers Art Gallery in Wenatchee for several years, and loved exchanging ideas with other artists. Upon retiring at age 75, he seized the opportunity to paint full time, which he did with passion and great versatility. In addition to his devotion to painting, he invested significant time at his church, sharing his gift of hospitality, and caring for his family. He treasured times with hisgrand/great-grandchildren at the beach and Lake Chelan. His love of life and laughter will be missed. His legacy to us endures in the artistic talent of his great-grandchildren.  He is survived by his son, Ronald (Becky) and daughter, Kergie (Michael) Garcia Smith Hamersley; nieces, Ann Barberg and Barbara Swann; nephew, Leonard Potter; and numerous Garcia cousins. He will be dearly missed by his grandchildren: Matthew, Leslie Ann (Carlsen), Aaron, Bethani Jean (Jones), and Justin and Jeffrey Smith; and by his beloved great-grandchildren: Benjamin, Samuel and, Jonathan Garcia; Emma, Gracie and Greta Carlsen; Cody and Nate Garcia; Terryn, Kyleen Jones and Carter Johnston; Cassidy and Ashley Mosset; Xander and Darien Smith; and Lola and Maksim Smith.  He will be laid to rest at the Evergreen Memorial Cemetery. A memorial service to celebrate his life will be held at Calvary Bible Church in enatchee, August 13, 2016 at 2 pm.

To order memorial trees or send flowers to the family in memory of Leslie Ralph Garcia, please visit our flower store.