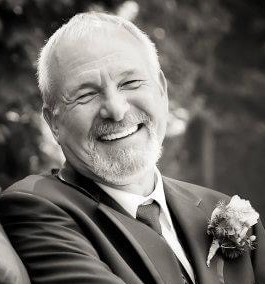 Jack was born September 19, 1950 in Oak Harbor Island, WA to Leonard Anthony “Lenny” Balicki and Geraldine Josephine “Jerri” Linker.  He spent most of his active childhood in Sunnyvale, California playing baseball, league bowling, Boy Scouts and even competed horseback riding.  He graduated from Sunnyvale High School in 1969 and got a degree from Foothill College in 1971.  While in CA, he married his first wife, Michelle Balicki in 1976. They had 2 children, Kelly Jeanne Balicki and Jeremy David Balicki.  He was a great and loving father throughout their childhood.  Just as with his mother, he took them camping and fishing. When A Christmas Story came out in 1983, he bought them Red Rider BB guns for Easter and taught them how to use them. He taught Jeremy how to play baseball and was always supportive of Kelly’s education, being front and center at her college graduation.

In 1986, Jack met his soul mate and best friend, Kathleen Elizabeth Rudolph.  After a short friendship they began dating and knew that they would be together forever.  They were married on October 7, 1997.  He said, “…she was the best thing that ever happened to me…”.  In 1989, they moved to Bellingham, WA and bought a beautiful farmhouse on 10 acres of land where he passed away embraced in Kathy’s loving arms.  Not long after they moved, daughter Michelle Richards and now husband, Dennis Richards, followed.  In 1994, Jack and Kathy welcomed their first grandchild, Amanda Nicole Richards, who lovingly called him “Papa”.  Then in 2011, Jeremy Balicki’s wife Stephanie gave birth to their 2nd grandchild, Olivia Morgan Balicki who made him laugh out loud all the time. Jack had an infectious laugh.  In 2014, Stephanie gave birth to their 3rd grandchild, a little red-headed spitfire named Jakob Stuart Balicki.  Most recently in 2020, Amanda Richards and Jeffery Ormiston gave Jack and Kathy their first great grandson, Westin William Ormiston. While in WA, Jack spent many years working at the Georgia Pacific Pulp & Paper Mill.  Later he would go back to school and get a degree in Information Technology from Skagit Valley College and work as an IT Tech.

Over the last 32 years in WA, the two spent weekends camping and fishing.  Jack loved all kinds of fishing.  He didn’t care if it was fly fishing in a river or dropping a line in the lake at dawn with a beer in hand.  He tied his own flies and spent hours with his family teaching and sharing all the fishing tips he knew. Jack also loved his motorcycles. His first was a Harley Chopper he used to due wheelies down the California freeways. Later in life he would buy a Harley Road King.  In 2009, him and Kathy took a road trip from WA to CA spread his mother’s ashes in Kennedy Meadows, where he and his brother David Balicki spent many summers with their mother. Along the way they made several stops, including Santa Clara, CA to visit old friends.  During football season, you could find Jack glued to the TV cheering on his San Francisco 49ers even if it meant losing the week of his family Fantasy Football league.

Jack was an amazing husband and father.  Known for being quite grumpy at times and set in his ways, his love for his family ran deep and strong like the rivers he fished. They always knew they could count on him for anything. He will be forever missed and in their hearts.

There will not be a formal funeral service, but there will be a celebration of life at a future date still to be determined.   In lieu of flowers, the family asks that you make a donation to the American Cancer Society in Jack’s name?

To order memorial trees or send flowers to the family in memory of Leonard Jack Balicki, please visit our flower store.
Send a Sympathy Card