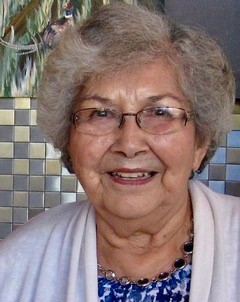 Laura A (Motschman) Boyd 99, long time resident of Richland WA, died peacefully on January 4, 2021, at Whatcom Hospice House in Bellingham. Laura was born in Nenana, Alaska to Natalia Meyitsetodelak Motschman and Richard Arnold Motschman in August, 1921. The 8th of 9 children, Laura lost her father at the age of 13 and her mother at 14. She and her 2 sisters stayed in the house built by their Dad in Fairbanks, next door to her oldest sister Jessie. Her oldest brother Harry lived with them for several years, to care for them.

She graduated from Fairbanks High School in 1939 and attended Univ. of AK-Fairbanks for one year, where she was on the women’s basketball team. She moved “Outside” in 1940, taking a steamship from Valdez. She intended to start nursing school, but plans changed and she lived in Portland OR with her brother Harry. It was there she met the love of her life, Jack L Boyd. In 1942, she took the train by herself across the country to Norfolk VA where he was stationed.

They were married on October 24, 1942, a date she always celebrated.

They moved to Richland in 1946 (for a ‘couple years’) until she moved to Bellingham in 2015. Their two children, Larry and Joanne, were born at Kadlec Hospital. Laura volunteered in the Children’s Orthopedic Guild, St. Jude’s Guild of the Catholic Church, Kadlec Auxiliary, and Richland Garden Club. She often was on the board or held oï¬ƒce in these groups. She sat at the front desk of Kadlec Hospital once a week for 60 years, and the Poinsettia Sale was one of her special projects. She was there enough, that a fond memory is her 3 year old granddaughter telling people her grandma was a doctor. She also had an eye for flower arranging and was the family’s “go to” person on special occasions. She enjoyed playing  bridge and golf in several groups (women’s and couples’). The couples’ golf group took fun  trips to California, Montana, and Palm Springs. She also liked playing the slots at local casinos with friends.

She was an accomplished seamstress-both clothes and re-upholstering. She always had time and energy for a trip. When kids were little there were lots of camping/boating trips to Priest Lake, Hayden Lake, Mt. Rainier, and the OR coast. After Jack retired they traveled to Europe, the Far East, and across the states. They also enjoyed time at their house on Hayden Lake, built by their son, Larry. After Jack passed in 1991, she continued to travel, both with family members and good friends, including train trips, cruises, and Elderhostel stays. She took her grandkids to Alaska to visit her home and relatives. She really enjoyed frequent family trips to NYC, Alaska, Boise, Austin, Eagle Crest in Oregon, and Disneyland. She enjoyed her last Disneyland trip at 97. In later years she delighted in being with her great grandsons, reading and playing card games. She’s remembered fondly as generous, friendly, and easy-going. She was a meticulous bookkeeper. Her grandkids knew if they wanted her to buy anything for them it had to be on sale. She loved a good shopping trip.

She is survived by Larry of Bend, OR and Joanne of Bellingham WA.; her grandchildren Kate (Kyle) Rajsich of Boise, and David (Kirstin) Boyd of Austin; great grandsons Brooks, Titus, and Isaac Rajsich; sister in law Marilyn Motschman in Crescent City, CA; her nieces and nephews Jackie, Diane, Carol, Richard, Dorothy, and Dena of the Dahoney family, in NY. and Jim, Kathy, and Barbara, of the Meyers family of Anchorage and California, Marianne of the Motschman family of CA, and Jerry and Marie Motschman originally from Anchorage.

She was preceded in death by her beloved husband Jack, and her brothers Harry, Fred, George, and Charles Motschman; and sisters Jessie Anderson, Nellie Motschman, Minnie Dohoney, and Marge Meyers; beloved niece Bernice Desmond; nephews Tom Meyers, Chuck Motschman and Dick Anderson. The family would like to thank The Willows and Silverado for their loving care and attention. She appreciated and enjoyed both residences and the kindness of the staï¬€ and her neighbors.

To order memorial trees or send flowers to the family in memory of Laura Amelia Boyd, please visit our flower store.
Send a Sympathy Card