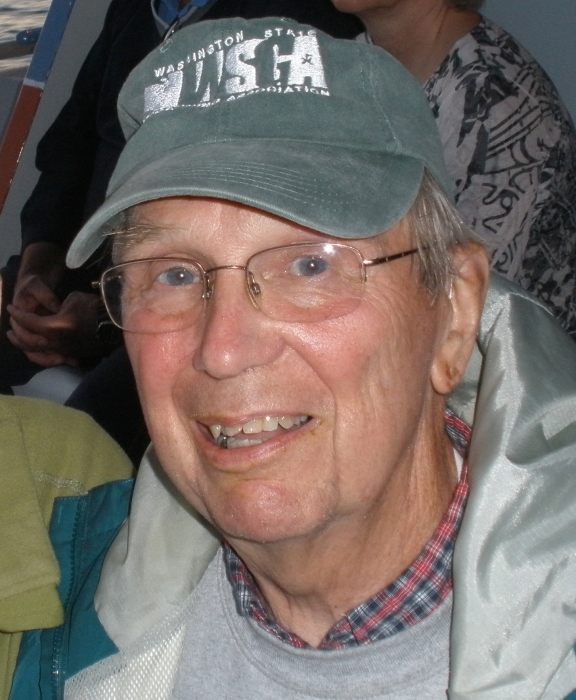 Ken Watjen passed away at the Bellingham at Orchard, Bellingham, WA on December 26, 2016, bringing his journey with Alzheimer’s to a close. His loving family was there for support along with his dedicated caregivers. He was a loving husband to his wife Susan, beloved father to his daughters, Laurel and Meg Watjen, and “Grampy Ken” to his granddaughter Izzy.

Born in New Milford, New Jersey in 1937 to Henry and Ada Watjen, Ken was the second of three children. His parents, brother John, and sister Joan preceded him in death. Ken’slifelong interest in mechanical things was fostered by his neighbor, Mr. Haynes, an inventor and the owner of an industrial power equipment rental business. Ken worked for his mentor as a teen and later ran the business for Mr. Haynes.

Ken attended the University of Rochester through the Naval ROTC program. A member of DKE, he graduated with a degree in mechanical engineering in 1959. He served as Lieutenant JG in the US Navy, spending time in San Diego and Japan.

Ken met his future wife Sue on a New Hampshire ski slope, when she accidentally slid into his ski lesson and his life. The couple married in 1965 and settled in New Jersey, where their children were born. Ken and Sue were married for 52 years.

In 1971 the Watjen family moved to Sue’s home town of Mattapoisett, MA and purchased Georgie’s Power Equipment in North Dartmouth, MA. Ken and Sue ran Georgie’s Radiator and Georgie’s Power Equipment together, with help from their daughters, for over 30 years. Customers could purchase or rent small power equipment such as chainsaws, brush cutters, snow throwers, generators and lawnmowers from Georgie’s as well as purchase parts and have their equipment repaired by the dedicated crew of mechanics.

Ken strongly believed in serving his community. For over 40 years he was an active member of Lions Club, first in Mattapoisett, MA and later in Ferndale, WA. He was president of the Multi-state Equipment Dealers Association, served on the Mattapoisett Planning Board and The Mattapoisett Historical Society, and devoted countless hours to the Friends of the Mattapoisett Bike Path. Ken was active in the Mattapoisett Congregational Church, helping out with the annual auction, Christmas Bazaar, and many other events over the years.

Over the years, Ken enjoyed vegetable gardening, working on his home and yard, camping with his family, and traveling internationally with Sue. The family spent many hours enjoying the water at Sue’s parents’ camp on Snow’s Pond in Rochester, MA. Ken enjoyed sailing and canoeing with his girls, and took them out fishing and quahogging in Mattapoisett harbor. He shared his love of mechanical things with his daughter, Laurel, teaching her to fix chainsaws and work on her own car. He never once told his daughters they couldn’t do something because they were female.

In 2009, Ken and Sue moved to Ferndale, WA in order to be closer to their granddaughter Izzy. In Ferndale, Ken volunteered at the Lion’s Club wheelchair warehouse, repairing wheelchairs to be loaned out. In his retirement, Ken especially enjoyed being with his family, quahogging, and geocaching with friends.

Ken was a thoughtful, quiet person with clear blue eyes anda subtle “dad” sense of humor. He often inserted puns into conversation, and enjoyed trying to make his girls smile. One of his special talents was wiggling his ears. He loved animals and rescued several over his lifetime, including his dog Popeye (who accompanied him to Georgie’s on a daily basis), several kitty cats, bunnies, and a duck.

To order memorial trees or send flowers to the family in memory of Kenneth Watjen, please visit our flower store.