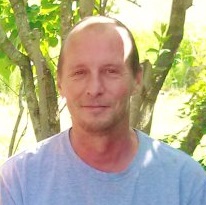 Jon was born to John Harold Wyngaert and Loretta May Grinton on May 8, 1962 in Bellingham, WA. He grew up in Ferndale, WA, were his family liked to travel to destinations such as Reno, Disney Land, and various camping spots.

He was a lifelong resident of Whatcom County where he graduated from Ferndale High School in 1980. He then proceeded to get his Associates Degree in machine lathing at Bellingham Technical College, graduating in 1990. Jon worked at Simplot Foods, Grizzly Industrial, Tree Island and Trans-Ocean Products Inc.

Jon married Tammy Lee Bird in 1983. They had their first child, Jon Eugene Wyngaert in 1986. They built their own house in Everson, WA which was completed in 1990 just after their second child Amy Lee Wyngaert was born. Jon and Tammy enjoyed gardening together, cooking together and of course raising their family.

One of Jon's favorite places to unwind was at the casino with his sister Connie Gilbert and brother in law Grant Gilbert. Jon was a huge fan of classic rock music attending concerts including Pat Benatar and Ted Nugent. He spent many years fishing the lakes and rivers in Washington with fellow family and friends. Jon always appreciated a good storm and the nice cool breeze of the bay.

Spending time with his family Jon Wyngaert (Kristen Robinson) and Amy Wyngaert (Austen Penfield) was very important to him. Most of all he cherished his interactions with his grandkids Jon M. Wyngaert (8), Zachery A. Wyngaert (3), Kylie E. Robinson (4) and was excited to meet the new addition to the family, Addison Wayne Wyngaert (due March 30th). Being a grandpa brought such joy into his life, they meant the world to him.

The family will be holding a Celebration of Life Service on Saturday, January 14th at 3:00 PM at the Deming Log Show Museum. Some main dishes will be provided, but please feel free to bring a side dish as this event will be pot luck style. Drinks will also be provided. Please come to have a bite with family and friends and share some memories of a great father, grandfather, friend and most of all, our loved one.

Preceded by his mother Loretta Grinton, his father John Wyngaert.

Jon's ashes will be flown to Reno Nevada for one last adventure where he will be reunited with his father in the Truckee River.

To order memorial trees or send flowers to the family in memory of Jon Wayne Wyngaert, please visit our flower store.