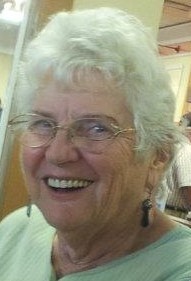 On Friday, May 19, 2017, Joanna N. Haug, age 83, of Bellingham, was called to her heavenly home by her Lord and Savior. She was born June 22, 1933 in Astoria, Oregon to Gus and Nina Johnson. When she was a small child her family moved to Whatcom County where she was raised at Clipper.  Joanna graduated from Mt. Baker High School in 1951. She married the love of her life, Maurice Hartman Haug.

Joanna worked at various retail stores as well as worked as a Tupperware Consultant. She used her connection with Tupperware to keep the church missions closets full for the missionaries. She was a past member of the Mt. Baker Rock and Gem Club. Joanna enjoyed going on trips with the club and enjoyed walking in the Arizona desert in search of pink diamonds and other gems in retirement.  She also liked making jewelry with the handmade beads she made with Copper Enameling.

Joanna enjoyed living with her husband on the shores of Lake Whatcom.  She loved fishing and wanted to get out on the lake whenever she saw fish rising on the calm waters.  She loved the annual family fishing trips to Lake Curlew and Lake Conconully and enjoyed watching the grandkids grow up with fishing poles in their hands.

When the weather turned cold here, she enjoyed wintering in the warm Yuma, AZ, sunshine. She enjoyed singing in the choir in the churches they attended, both in Washington and Arizona, helping out with various local church projects, as well as, having the opportunity to travel to Western Samoa working with the missionaries on the building of a church.

During the summer months Joanna loved getting together with her close friends and went searching, through the brush, for a good wild blackberry patch.  After a hot day of picking berries, she would gather the family and cool off in the Stillaguamish river or a swim in Lake Whatcom encouraging us to join her.

Joanna was happiest when she was entertaining family and friends. Her and her husband Maurice would prepare many meals for 15-20 friends several times a year both here and in Yuma.   Many nights were spent crocheting blankets and baby clothes, while sharing stories, and ended with hot games of Aggravation.

Joanna loved animals and generally had at least one pet throughout her life.  She loved dogs and her last two pets were her dogs Annie and Peaches, both of which brought smiles to her face each day.

A celebration of Joanna’s life will be held Saturday, August 5, 2017, at 11 am at Grace Church, 2502 N. LaVenture Rd., Mt. Vernon, WA 98273, with Pastor Billy Farrar officiating. Family and friends are invited. To honor the memory of Joanna and her love for meals with family and friends, lunch will be served after her Celebration of Life service.

In lieu of flowers the family asks that donations be made to the Alzheimer’s Association of Washington.

To order memorial trees or send flowers to the family in memory of Joanna Nina Haug, please visit our flower store.