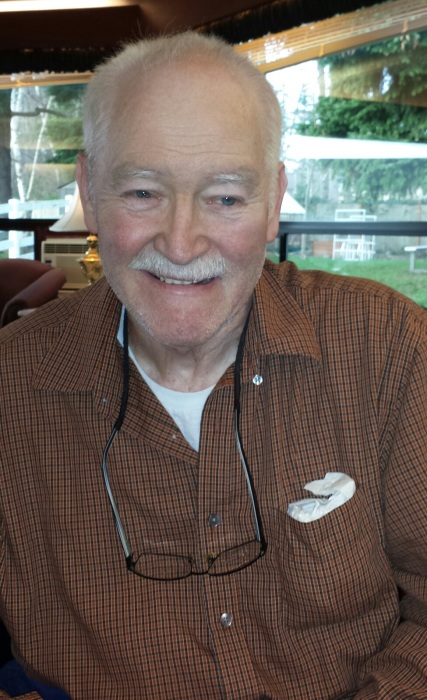 Jerry Lee Williams, age 74, of Bellingham passed away in Bellingham Thursday, Nov. 12, 2015.  He was born Dec. 28, 1940 in Eminence, Missouri to Emitt Dolphous and Vivian Juanita (Curd) Williams.  Jerry graduated from Concrete High School in the class of 1959, and in 1960 married Joyce Ellingboe in Newhalem, WA.  He worked for Seattle City Light in the towns of Newhalem and Diablo.  He moved the family too Ferndale in 1972 after being hired as an Operator for the Atlantic Richfield Refinery where he worked until his retirement in 1995.  Jerry enjoyed hunting with his friends and family and telling stories around a campfire or anywhere else. He also enjoyed Horseracing, Slot Machines and Pull Tabs with a good beer.  Jerry battled Diabetes and Parkinson’s for many years. He was preceded in death by his parents and his brother Gary Williams of Naselle, WA. He is survived by his wife Joyce of 55 years; daughters, Tracy Crank (Vern) of Blaine, Heidi Summers (Greg) of Bellingham, Becky Stack (Rob) of Ferndale; son, Chris Williams (Dionne) of Nooksack; grandchildren, Corey Williams, Blake Williams, and granddaughter, Willa Crank; step grandchildren, Joel and Jordan Summers, Courtney, Brenden and Karrisa Stack; brother, Ricky Williams of Naselle, WA.; and numerous nieces, nephews and other relatives. A family and friends Open House in Jerry’s honor will be held Saturday, Nov. 28, 2015 from 1:00 – 4:00 PM at the Custer Sportsmen’s Club, 3000 Birch Bay – Lynden Rd., Custer, WA 98240.

To order memorial trees or send flowers to the family in memory of Jerry Lee Williams, please visit our flower store.