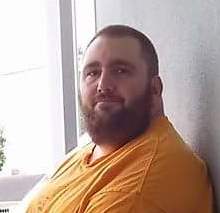 Jason D. Whalen, age 38, of Lynden, passed away on Thursday, January 26 surrounded by his family at the Whatcom Hospice House in Bellingham.  He was born July 25, 1978 in Bellingham, Washington to parents Jerry Norris and Kathy Louise (Honcoop) Whalen.  Jason was preceded in death by his brother Jerry and his grandparents, Maurice and Evelyn Honcoop and is survived by his mother Kathy L. Graybeal and his father Jerry N. Whalen and his stepmom Donna; sister, Evelyn and Hanna Graybeal, Carman Whalen and Lisa Morris; brother Brian and numerous aunts, uncles, nieces, nephews and other relatives.  A Celebration of Jason’s life will be on Wednesday February 1, 2017 at 11:00 AM at North County Christ the King in Lynden, Washington with Pastor Ted Thompson officiating.

To order memorial trees or send flowers to the family in memory of Jason Dwayne Whalen, please visit our flower store.