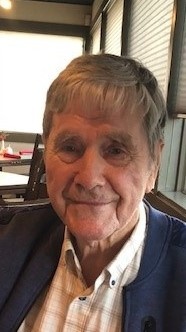 Ever loved, ever remembered, ever kind and true, our counselor and guide.

Celebrating a great life lived.  Jim was born in Oacoma S.D. March 16, 2026.  When he was a young boy, he and his parents moved from their ranch north of Chamberlin S.D. to a smaller ranch in Custer S.D.  While a Senior at Custer High School, Jim’s sense of duty to his country led him to enlist in the U.S. Navy which took him to the South Pacific where he proudly served his country on a maintenance ship until the end of WW II.  Upon his discharge from the Navy, he returned to Custer to finish his High School education, followed by his move to Denver CO where he attended and graduated from Denver University.

After graduation from college, his first job was with the Rapid City Journal in the advertising department where he met many lifelong friends and his future sister-in-law Janie Armstrong.  Janie suggested to her sister Mary, that she visit her in Rapid City so that she could introduce her to Jim.  Jim & Mary were a match made in heaven and were married in May 1955 and made their home in Rapid City for the next 63 years until sweet Mary passed away September 8, 2018.

Jim & Mary were blessed with 3 children, Randy, DeAnne & Rick.  Wonderful family memories were made and shared with close family and friends.

Jim & Mary became business owners of several small printing companies where the smell of printers’ ink, newsprint & all things printing became part of the entire family’s blood. Jim’s hard work ethic was instilled in his children; the job wasn’t done until the last newspaper rolled off the press.

Most years Jim & Mary’s travels took them west where they visited their family on the West Coast; Randy in Southern Oregon, DeAnne in Northwest Washington and their Grandson Marcus and family first in Boise ID and then Southern Oregon.

Highlights for “Navy Jim” were any ferry that he could jump on while in Washington State – he could always be found on the ship bow regardless of the weather, a cup of coffee in hand.  For Jim & Mary’s 50th wedding anniversary, a cruise to Alaska was his dream vacation.

Jim peacefully slipped away into the arms of his Heavenly Father June 22, 2022. He had had a brief hospital stay and was in a lovely Memory Care for 3 weeks when he was called Home to be with Mary, his beloved son Rick, his daughter-in-law Rhonda as well as so many beautiful family members and friends who were awaiting him with great welcome.

Jim lived the last 3 years in Lynden WA with his daughter DeAnne and his grand puppies.  He always had a great, sparkling smile on his face, and it was a joy to be able to love him and have him close 24/7 for those years.

Jim’s kindness, his smile, his grace, his honesty, and his love for the Lord, were always evident to all who met and had the pleasure of knowing him.

Jim will be forever in our hearts, forever at peace. For every day that passes, something beautiful remains; precious memories shall always be alive in our hearts.

He leaves behind his loving daughter DeAnne, son Randy & wife Karen, grandson Marcus & wife Carrie, his great grandchildren, Ada, Rowan & Gavin, his sister-in law’s, Annie Danielson & Dottie Larson along with his many nieces & nephews including Mark & Sandi Armstrong who were enroute to see him when he went to be with the Lord.  He so loved his church family at Restored Life Outreach in Rapid City  – his pastors Kelly & David Patterson – all were so very dear and special to him.

A Celebration of Jim’s life will be held in Rapid City later this summer.

To order memorial trees or send flowers to the family in memory of James Carlyle Omdahl, please visit our flower store.