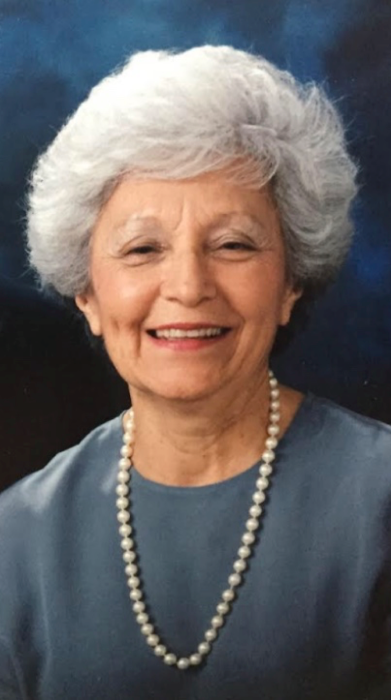 Helen Reyes Aguirre was born to Patricio and Felicitas Lagunas on June 23, 1923, in San
Fernando, California. She was the third of four sisters. Helen married Philip Alcala Aguirre on
May 18, 1943, and they had four children: (Jonathan) Philip Aguirre, Patty Brown, Jill Beaty,
and Jack Aguirre; eight grandchildren; 37 great-grandchildren; and two great-great
grandchildren.

Mom was raised on the Stetson Ranch in Sylmar, California, until she was 11 years old. She
came to know the Lord through her mother‘s influence after her father‘s death. Despite the
hardships, her mother’s unwavering faith became a living example to the faithfulness of God to
meet all her needs.

Mom and Dad raised their family in Northridge, California. She was devoted to the Lord and
took us to church weekly. In 1963 she went to work to support the family after Dad was
seriously injured. Dad was saved in 1976, which sweetened their remaining years, and they
began serving the Lord together. In addition, they served in the church soup kitchen. In her
70’s, Mom put on her work boots, gloves, and a sickle and gleaned fields for the community
food bank. She read to the blind and learned to quilt. In her late 80s she visited the
homebound and drove her 94-year-old neighbor to the market weekly.

Dad died in 2005. Mom continued to be an example of God‘s grace through each life change.
Patty and Jill cared for mom until she moved in December 2016 to Washington where she lived
at Silverado Memory Care. Staff loved her because of her winsome personality. During this
time, Philip, Sue, and Jack had the honor of assisting in her care until her peaceful homegoing
on Saturday, April 14, 2018. She will be immensely missed!

Precious in the sight of the Lord is the death of His saints. Psalm 116:15.

To order memorial trees or send flowers to the family in memory of Helen Reyes Aguirre, please visit our flower store.
Send a Sympathy Card