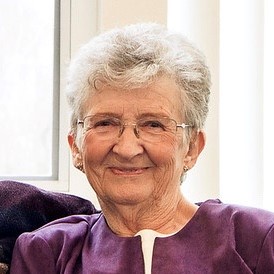 Gloria June Balzer went home to be with her Lord and Savior Jesus Christ on July 25th, 2019. She is now rejoicing and reunited with her dear husband Elden who passed away last fall. Gloria was born in her family’s farmhouse on September 8th, 1933 to proud parents Melvin and Hester Haugen. Her siblings Elizabeth and Isabel sadly passed away early in life, and Gloria grew up with her loving younger brother Melvin Jr. in beautiful 1940’s Whatcom County. Gloria graduated Valedictorian from Blaine High School in 1952 and went on to attend a business school to prepare for her career. The Lord providentially used the Birch Bay Mennonite Brethern Church on Jackson Rd. to introduce Gloria to a handsome and handy fella named Elden. They were married on April 9th, 1954 and celebrated their 64th wedding anniversary in 2018. Gloria and Elden spent many years serving in this church, and many young people were greatly impacted by her Sunday school and youth group ministry. While stationed in France with the Army, Elden and Gloria became proud parents to Michael Balzer on February 24th, 1956. 2 years later Jerry Balzer came along to complete the family unit. When Jerry was a kindergartner Gloria became a teacher’s aide and went on to serve 33 years in the Ferndale and Bellingham schools in payroll and bookkeeping. In addition to spending time with her family and precious grand and great-grandchildren, Gloria loved jigsaw puzzles, trips to Alaska with Elden, genealogies, and Bible memorization. Gloria and her friend Martha spent years memorizing entire books of the Bible! Gloria was a devout Christian and she’ll be remembered by many precious friends and family members as selfless and giving. She is survived by Michael Balzer and wife Kelli Reilly of Bellingham, WA; Jerry Balzer and sons Richard and TJ Balzer of Ferndale, WA; brother Melvin Haugen and wife Doreen of Bellingham, WA; sister-in-law Gladys Wiebe of California; granddaughter Natalia Burke and husband Ryan Burke (children Damian, Mylee, Aliya, and Adrian) and many other beloved family members and friends. A memorial service honoring Gloria will be held at Birch Bay Bible Church at 2:00 pm on Thursday, September 5th.

To order memorial trees or send flowers to the family in memory of Gloria June Balzer, please visit our flower store.
Send a Sympathy Card