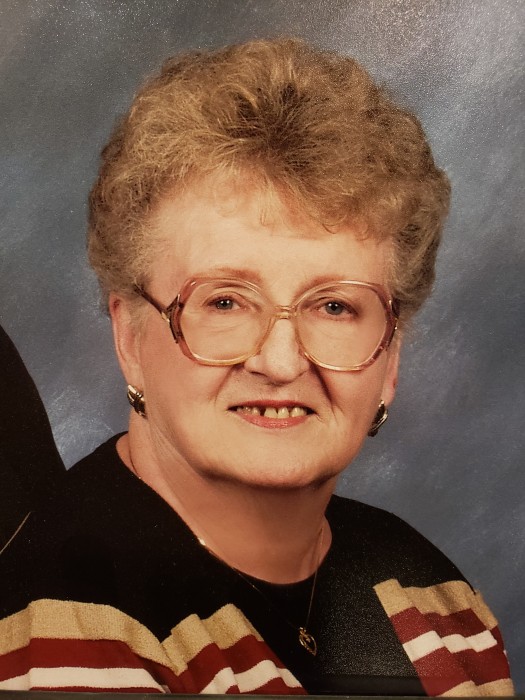 Gerry (Mom, Grandma and Great Grandma) Passed away Peacefully while she was sleeping.  She was surrounded by her Family that Loved her very much. Gerry passed away on February 8, 2019 at 3:43 a.m. During this time she was a patient at St. Joseph's Hospital in Bellingham, Washington.

Gerry was born on June 16, 1935 in Riverside California to Paul Howard Gordon and Eva Frederickson Gordon.

She was a natural gifted Artist, who in her early years started out painting. She would paint on the inside lids of cottage cheese containers that were made from tin. She would turn these lids into beautiful pictures of the world outside.

Raising her children and being home was her greatest Joy. She was a beautiful seamstress that created Halloween costumes as well as curtains throughout our home. She created her own clothing and sewing for her family gave everyone, a one of a kind ward-robe.  Her patterns were designed by her, as she drew them onto newspaper and then cut the pattern out. My Dad was the “Chief of the Nation” in Indian Guides with my brother. When he volunteered her to sew a twelve- man teepee, she took on the challenge without a fuss. The project occupied and took over the Master Bedroom completely. My mom was one to stay busy.  Even when she relaxed in life it was by doing something else that she created. Like her crocheting afghans and embroidering patterns of beauty on the top of these afghans. Each one was unique within its own beauty.  The scene in which she created, was like a painting on a blank canvas. When she decided on what the scene was going to be, it was the beginning of counting each tiny square on her pattern as being equal to one stitch. The patience was astounding to me. As each afghan had great meaning and her artistic talents came to life.  Knowing that this is what she chose to do while relaxing. She displayed these at the Lynden County Fair where she won several ribbons for her creativity that was greatly admired. Everyone she knew wanted one of these creations as if this was her mark, that she was leaving in this world.

She was an outstanding cook and baker.  It was cooking of meals as well as what she baked that made her the happiest. Which she continued cooking right up to a few weeks before she passed on.  She was fiercely independent. She fought hard to live and enjoy life. She created cooking as an art form that came from her heart and she continued doing so right up until the end.  Her family and friends always asking for her famous Potato Salad and Casseroles.  Her baking will never be forgotten, as she did this every year for our father on Holiday’s at his work place. She did this throughout the years for her family and friends who looked forward to everything she cooked and baked. She entered her home-made Jam, Pies and Pickles in The Ventura County Fair winning first place many times.

As a young adult Gerry was friends with Ronald Reagon (Before he was a President) and she and her friends would go horseback Riding throughout his property and along the Beach. Gerry's foundation in Life was her Love and Faith in God. She was honest and true to herself.  This she shared openly and outwardly to others.  Teaching us about self -care and respecting others when they show respect to you.

At age ten she suffered with cancer for a year.  Her Mother took the Street Car for two hours and then continued to walk the rest of the way on every Sunday. This was the only time she could see her. Hospitalized for almost a year in a Ward for children.  She was the only child to survive. “March of Dimes”, helped children with cancer back then.  Since my mom was the only survivor of this cancer, the March of Dimes has called my mom every year to see if she is still living.  My mom gave back to The March of Dimes every year throughout her life.

My mom always dreamed of attending a College of the Arts but was not able to obtain.  She started working and helping her family with her earnings at age twelve.  She picked berries and other fruit, as well as babysitting to earn what her family needed as she grew up.  At sixteen she worked at a home-made Candy Store called, Al Sheets located in Hollywood, California.  As a young adult she started working at Whittaker's in North Hollywood as a Mail Clerk, which is a Company that makes Aerospace products.  It was there that my mom met Richard Paul Mattson (Deceased) who worked in Production, at the same Company.

On June 16, 1956 she married Richard Paul Mattson in North Hollywood At Hope Lutheran Church. Three months before her wedding she was asked to Model at a fashion show.  She went and was given a Beautiful one of a kind Wedding Dress. It was one she could only Dream about, but could never afford. After modeling they gave her the dress. For one and a half years, she continued to work. She gave notice, right before giving birth to her first child. Shortly thereafter they bought a home in Simi Valley, California, where they raised three children and sadly one full term still-born.  They had a Daughter Julie Ann Mattson (Hanft), Mark Richard Mattson (Deceased at nineteen years old) and Bryant George Mattson.  She was a "Block Parent" for our neighborhood. Which was a safe place for children to come into and able to trust the people that live there. She worked part time in retail during the evening after Dinner.  She wanted everything for her children that she grew up without. She was a Girl Scout Leader and always in charge of the PTA (Parent Teacher Association.  She did it all and never complained. She was always part of a Bowling League that she loved and was very good at.

Gerry suffered from Rheumatoid Arthritis, Lupus and High Pulmonary Pressures, which took her life.  She was on full Oxygen the last four years of her life.  She went through the pain and put up a good fight to survive until the end. She never let her difficulty in breathing stop her, from getting out in the world.  She never stopped cooking or baking until the last three weeks of her life.  She was fiercely independent and a brave Warrior through her suffering.  She Blessed all her family and friends with her Grace and Love in which she always lived by.  She will be very sadly missed by all who knew her.

The day before she died, she told me that “Your Anniversary is tomorrow and it will be the first time I didn’t get you and Eric a card.  Our Mom was very Special.  She knew all of the family and all of their families plus all of her friends, the dates of all the Birthday’s and the Anniversaries.  Do you know how huge that is?  Her mind was, “sharp as a tack to the very end”.

She was dedicated to her children and grandchildren as she always reminded us all that Family is everything.  Leaving a hole, in all of our lives as we try to move forward, holding tight to all of our many memories.  She left behind two children, Julie Ann Hanft married to Eric E Hanft, children Steve with wife Aimee and their Daughter Abbie. Tim married to Talonna Hanft and their daughter Lexi.  Step Grandchildren Tod and his children Sage and Lyle. Brian and children Chloe and Connor. Monica and husband Mark and children, Ben, Jonah, Maya and Ilan. Second child Bryant George Mattson married to Tamara Mattson and children Nick and Rachel.  We will ALL miss you so very much from your family and to your many friends.

I watch you sleeping
Your demeanor is calm
While you finally look so Peaceful.
I guess the fear of seeing you suffer
was more about not wanting to see you go.
It took everything I had inside of me
to make sure I was with you during your last days.
Mom you were right as always
All of my deepest fears went right out of me
Showing me that your body, was now just a "Shell"
Teaching me that the fear i felt was only, about fear itself.
Your Spirit was leaving you and before me was just a body.
I knew your Spirit would leave to soar up above.
Even though "lucid" times were very few
It was like you were preserving your energy
To speak only what needed to be said.
Sometimes you just don't have to "Dive in Deep"
To find the answers.
Instead they come in small doses
That guide you through.
Then again that is always what you would do.
I hold tight to the very little you said
while tucking your words safely into my heart.
You were a light in a dark room!
For your Faith in God is how you lived.
I hope you can hear my voice
As i am walking along your side every day.
I don't know why you and I have lived this life
With the same health challenges.
I would Never change anything about my path in life
Because that brought us closer together
Not just as a daughter but as your Best Friend.
My life is dark right now and filled with heart ache.
My desire is to capture these memories and stories of you
I place them into my soul and hold them dear.
I am grieving for you Mom and I don't want to let you go.
Time will pass and move me forward.
Your Light causes my darkness to get brighter every day.
Because you are my mom who knew me so well!
One day I will put my sorrow under the sand on my Beach.
I will carry your ashes out to Sea.
You will soar above us all
Spreading your wings because now you are free!
I have gathered the love you have given to me
With that Love my Heart will mend.
When the time comes
We will be joining you out at Sea.
A thousand years from now on windswept shores
Will be a gentle reminder of Precious Love.
A storm of uncertainty tries to overtake
A need to absorb the Pain.
Until then I will fill my soul...
With memories and feelings from a "Mom" so true
That has become part of this "Bright Light" in my sky.
Showing all of us to look "up Above"
For that is what she believed to be true
as she still continues guiding me along this path, because;
"That is what my mom would do".

In Lieu of Flowers you can send a Check for a Donation to her son Bryant Mattson @ 2446 Lyn Court, Custer WA 98240. Her Daughter, Julie Hanft, will be sending the donation for people who suffer with, "High Pulmonary Pressures", which is what our Mom struggled with and took her life.  This very expensive medication gave my brother & I and all who knew her, three and a half more years to be with her.