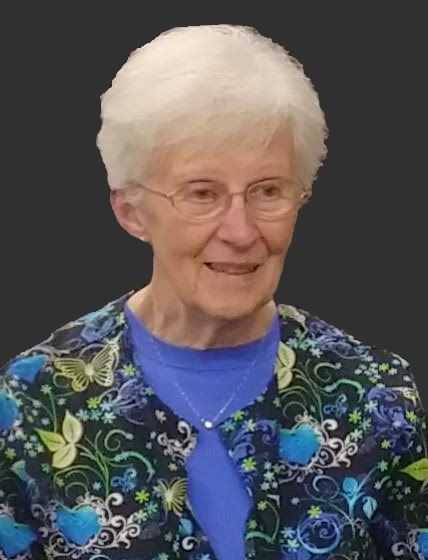 Geraldine “Geri” Tjoelker, age 81, of Lynden, WA, passed away Sunday, January 19, 2020.  Geri was a devoted wife, mother, grandmother, and great-grandmother.  The first child of Bill and Arendine Nyland, she grew up in Sumas, WA and graduated from Lynden Christian High School (1957).  In 1958, she married George Tjoelker, with whom she produced and nurtured four children.

Geri saw herself as a housewife and partner on the family dairy farm.  She fed and cleaned the children, maintained an immaculate, well-appointed home and yard, and nurtured an adventurous faith.  The presence of four lively children necessitated ceaseless vigilance to maintain the immaculate home and yard.  Her broom became the stuff of legend, not only for tidying the floors, but also for redirecting wayward cows and exuberant dogs disturbing her begonias.  While a true paragon of domestic excellence, Geri was so much more.  She distinguished herself as a mimeograph wizard in her role of church secretary, and generously volunteered her time leading or supporting church and school events.  In retirement, she and George volunteered together, working with a number of Christian service organizations, including SOWERS, for which she served as office manager and where she discovered her typewriter and mimeograph machine to be obsolete.  She and George also spent a number of years volunteering with the Trout Creek, Black Lake, Warm Beach, The Firs, and Cedar Springs Bible camps and conference centers.  In later years, she stayed closer to home, volunteering with the Project Hope Foodbank and Second Chance Thrift Store, both in Lynden.

Many fond memories will sustain Geri’s family in her absence.  Her children remember her fierce advocacy, unwavering love and support, exceptional picnic fare, and broom.  Her grandchildren appreciated her attentive interest in their lives.  Her great-grandchildren may be too young to harbor many memories of her, but her warm presence and weeding skills might have made an impression.

Geri is predeceased by her husband of 59 years, George, and is survived by their four children, Roger (Cynthia), Larry (Joy), Dennis (Edi), and Sandi (Dave).  The children provided George and Geri with 11 grandchildren and three great-grandchildren, of whom she was very fond.  Geri is also survived by her brothers Gary (Grace), Henry (Shirley) and Fred (Nancy).

A memorial picnic with extended family is being planned for summer, 2020.  Geri passed too soon and will be deeply missed.  To honor her memory, donations may be made to Starfish Ministries (http://starfishministries.org/; 1706 Front Street, #440, Lynden, WA  98264), a charitable organization she believed in and supported.

To order memorial trees or send flowers to the family in memory of Geraldine "Geri" Tjoelker, please visit our flower store.
Send a Sympathy Card