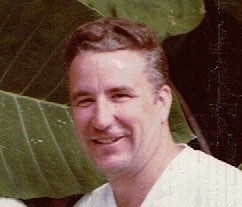 George took the train west as a 17 year old to attend the University of Idaho on a NROTC scholarship.  When he was a senior, he met Norma Howell, a freshman from Rathdrum, Idaho.  After graduating and marrying Norma in California in July 1951, he did his required service time as a Navy gunnery officer during the Korean War.

After his service, there were hungry mouths to feed at home.  Although George graduated with an education degree, planning to become a teacher and coach, he begin working at Fidelity Savings and Loan in Spokane WA.  The start of his fifty year career in the banking business.

George was the branch manager for Fidelity in Moses Lake, WA from 1958-1962 and made many lifelong friends there, then on to Seattle from 1962-1969.  In 1969, George was named Executive Vice President of Pacific First Federal Savings and Loan in Tacoma.  He had a daily commute of 60 plus miles, so he bought a VW Bug.  PFF wasn’t too happy one of their VP’s was driving around in a VW!

The mid-seventies brought another move, this time to Bellingham and what was to become Horizon Bank.  George was President and Chairman of the Board when Horizon was rated as one of the top regional banks in the United States.

As a youngster, George was heavily involved in all sports and held several high school swimming records in Detroit.  He held a University of Idaho breast stroke swimming record for over 50 years, not broken until the early 2000’s.  As a father, he put his golf game aside for many years to help with his kids sports.  He coached many of their teams, including a top ranked youth soccer team with Al Jackson in the late 1960s.  And he was a great organizer of games for all the neighborhood kids.  Once the kids were grown, golf on a regular basis was back in the picture.  He was the club champion at several different courses.

George held leadership positions with many different charitable organizations throughout his life and is a past President of the Bellingham Golf Club.

Traveling the world, snowbirding to Arizona, summers in Bellingham and family dominated his life upon retirement in the early 2000’s.

George played by the rules and never changed them in the middle of the ‘game’, be it at home or in business.

George loved playing Cribbage and Pinochle.  We can hear the cards shuffling as a new game is now starting in Heaven.  As a family, when we played board games, Dad would always keep score.  Instead of his name on the score sheet, he always wrote, ‘Winner’.

And George truly was a Winner.  He was a great husband, father and grandfather and friend to many.  We miss him so much.  We always will.

As per George’s request, there will be no services.

To order memorial trees or send flowers to the family in memory of George William Gust, Jr., please visit our flower store.