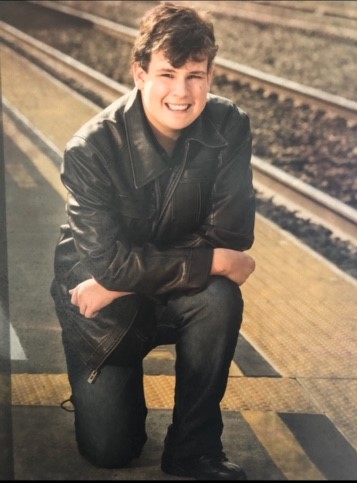 The Church of Jesus Christ of Latter Day Saints

It’s with deepest sorrow we announce that Garrett Rusing (Ace), age 22, our beloved son, brother, grandson, uncle & friend passed away suddenly Monday, April 8, 2019 in Ferndale, WA from a fall due to a Stress Seizure caused from broken heart syndrome.  He was devastated when he lost his dad, his home there and asked daily when he could go return back home to dad’s house. Garrett was born February 22, 1997, he grew up in Bellingham, WA. Garrett was delightful charming and kind, and had such a sweet smile. Garrett loved his dogs Martini Oreo and Bandit. He had a deep love for his family and cherished the time they spent together especially spending time in Hawaii swimming all day with his sisters and buddy Matt.  He also loved to travel to Disneyland and go on the ride “Pirates of the Caribbean”. Garrett loved living at his & his dad’s Chuckanut home where he could watch the trains. Garrett loved trains from the time he was a little boy. One of his favorite things to do was to ride the Amtrack train every month. Garrett loved visiting his friends down at the Bellingham Amtrak train station, Garrett and his family rode the train down to Mount Vernon almost every month. Garrett graduated from Sehome High School. He loved all his friends from the Faces Summer Camp, Local Max Higbee Center and from the Vancouver Cheer Gym, and all his friends and family up in Canada, especially Team Rainbow team buddies, Garrett’s team he cheered on. Garrett loved his family, he is survived by his mom, Laurene Rusing; sisters, Brittany Elsevier, Justice Rusing, Neva Hansen and Grace Rusing; brother, Chris Hansen; nephew, Richard Hansen; his aunt Maurene Newman, uncle A.J and his Alaska cousins, Arlene, Marche’ and Alicia, his Uncle Larry Binggeli and cousin Lacey.  He loved his big brother Matt Murrieta and papas Hansen, Grandma Norene Binggeli, Great Grandma Marie Binggeli and his many, many friends and family throughout Whatcom County, Alaska, Hawaii and Oregon. We know Garrett is now on a train ride with his family who preceded him in death, his younger brother Michael Rusing, Father Gary Rusing, Grandpa Larry Binggeli and Great Grandpa Walt Binggeli. A memorial Service will be held 11:00 AM, Monday, April 22, 2019 at The Church of Jesus Christ of Latter-day Saints, 2925 James Street, Bellingham, WA 98225, with burial to follow at Woodlawn Cemetery, 5977 Northwest Rd., Ferndale, WA 98248. A reception following the graveside service in the Disney Spirit, “You’ve Got a Friend In Me” with Woody Buzz and Thomas the Train. So bring your train hats and red scarfs!

To order memorial trees or send flowers to the family in memory of Garrett Michael Rusing, please visit our flower store.

The Church of Jesus Christ of Latter Day Saints