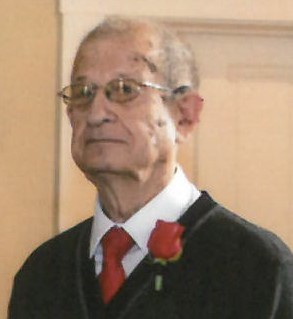 Eldred Dennis Reimer was born April 6, 1933 in Corn, OK to Menno and Martha Reimer. He attended grade school while helping on the family farm. Surrounded by five sisters, who he said would never let him get a word in edgewise, he spent time playing by the creek between farm chores. At one point he managed to break his right wrist while     attempting to crank-start a tractor. To hear him tell it, his parents took him to a “quack of a doctor”, because his wrist was never set properly, and he could never hammer or throw a ball with his right arm from that time on.

In May of 1945 the Reimer’s moved to Gladwin, MI in the hope of finding a way to better provide for the family. After residing there for approximately one and a half years, a new opportunity arose. In Custer, WA they had extended family and a Mennonite Brethren Community to consider. In the fall of 1946, the move was made to a farm on Haynie Rd, which is the current location of the Dakota Creek Golf Course. While working the farm, the family attended Whitehorn MB Church. Eldred had accepted Christ as his Savior at a young age and made the decision to be baptized in the church at the age of 14.

He attended Custer Elementary School and graduated from Ferndale High School in 1951. Following graduation, he drove truck for the Seattle Goodwill Industries as his Selective Service from March 1955 to March 1957. Eldred first met Kay at the wedding of his sister Clarice, and Kay’s brother Nick. They began dating in January 1958, and after a few short months, Eldred proposed in May. Shortly after getting engaged, he left for California to continue working and living with his brother-in-law Marvin and his sister Doreen Bartel. Eldred and Kay’s courtship continued long-distance through letter writing until they were able to be married on November 29, 1958 in the Arnold MB Church, BC.

Making their first home in Bakersfield, CA, they welcomed their first son Brian to the family. In 1961, Eldred moved the family to Wasco, CA, where Bruce was born, and soon after, Loren arrived in 1962. The family attended Wasco MB Church where Eldred served in the Sunday School Department. He provided for his family by working as a tractor mechanic at the local Ford dealership. In the fall of 1966, to get away from the heat of the Central Valley, he decided to move his family closer to relatives in the Pacific Northwest. They leased a dairy farm in the Birch Bay area, where his parents joined them in helping to run the farm. This allowed Eldred to work as a tractor mechanic at Brim Tractor in Lynden, WA. In 1972 the farm lease expired, and Eldred began searching for a new way to provide for his family. He wanted to be      self-employed and was willing to take a risk. Alongside Kay, they       purchased and learned the Upholstery business in Lynden, WA.

While the boys were growing up, Eldred was active in the Birch Bay MB Church. He enjoyed singing in the choir, helping with the Food Committee for over 20 years, and occasionally assisted with driving the youth using the Reimer’s Upholstery business van. The 1980’s brought changes to the family with the addition of two daughter-in-laws, the passing of his youngest son Loren, and the birth of the first grandchild. Life was full with the business, occasional camping trips with close friends, and enjoying family as the 1990’s brought three more grandkids in to the picture.

In 1998 Eldred was diagnosed with a heart condition that he struggled with until his passing. As a result of his heart condition, they were forced to retire and sold their home later that year. They moved to  a small apartment in Bellingham, WA for a short period of time, before purchasing a home in Ferndale, WA. Eldred was quiet by nature, with a deep love for his family and church. He was a   supportive Grandfather, attending many sporting events to cheer them on. He also loved to watch, read about, and follow sports. He enjoyed listening to Southern Gospel Music, Men’s Quartet’s, going to the Men’s Coffee Break on    Tuesdays at Corell Park, and playing Rummikub. Eldred was an avid reader, consuming The Bellingham Herald and The Seattle Times front to back, and fully utilizing his local Library Card to read historical     wartime novels, and anything by John Grisham.

Our Heavenly Father granted him many years beyond the expected time that medical science predicted for him. Earlier this year,  he met his first great-grandson, Daniel. Eldred went home to be with his Lord on November 13, 2019, at Whatcom Hospice House in Bellingham, WA. He was 86 years old, and passed away only a couple weeks before the 61st wedding anniversary to his loving and faithful wife, Kay.

To order memorial trees or send flowers to the family in memory of Eldred Dennis Reimer, please visit our flower store.
Send a Sympathy Card