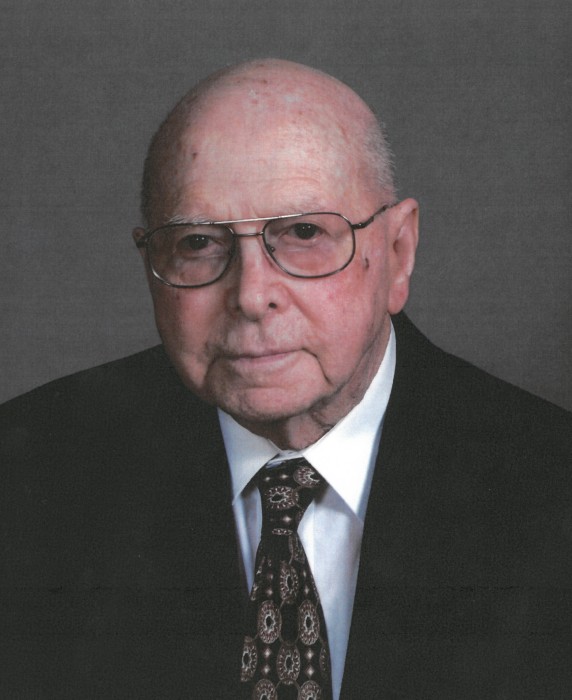 Eldon John Kahny was born on January 3, 1924 in Pierce, Nebraska, the eldest child of Frank and Emma Kahny. Born into a Christian home, Eldon’s lifelong walk of faith began with his baptism on January 24, 1924 at St. John’s Lutheran Church in Pierce.

Eldon attended District #35, a one room schoolhouse n Pierce. In early 1937, the family lost their farm to the bank; on May 5, 1937 at the age of 13, Eldon and his family left Nebraska for Oregon. The family’s first stop was Twin Falls, Idaho where his dad found a job paying $2 an hour. They next stopped in Weiser, ID where Eldon and his father worked haying for the summer. Eldon was tickled that he was paid “man” wages at age 13. They arrived in Springfield, Oregon on August 17, 1937.

Eldon was confirmed on May 22, 1938 at Grace Lutheran Church in Eugene, Oregon. He started Springfield High School in the fall of 1938. Having a desire to become a minister, he transferred to Concordia High School in Portland where he completed his sophomore and junior years. Ultimately deciding not to pursue the ministry as a career, he returned to Springfield High School where he graduated in the spring of 1942. The family moved from Springfield to Gresham, Oregon on November 20, 1943. Eldon worked at the Bissinger Wool Pullery in Troutdale, Oregon for a short time.

Eldon was inducted into the US Army in Eugene, Oregon on January 13, 1944. He served honorably during World War II until his separation in 1946 from Fort Sam Houston in San Antonio, Texas. In 2016, he participated in the Puget Sound Honor Flight program, in which he and other WWII veterans from the Pacific Northwest region were flown to Washington, DC to tour veterans' memorials throughout the nation’s capital.

Eldon met the love of his life, Emily Kerkman, through Walther League, the Lutheran Church Missouri Synod (LCMS) youth group. He and Emily were married on April 20, 1951 in Puyallup, Washington. Eldon and Emily had three children: Joan, Marilyn, and Jim. During his long career with the JC Penney Company, the family moved frequently around the Pacific Northwest and ultimately to California. Wherever they moved, they made friends easily and always became members of the local LCMS congregation where Eldon would add his tenor voice to the choir.

After 37½ years with JC Penney, Eldon retired from the Lodi, California store in 1984. Although Eldon continued to work for many years on a walnut ranch near Lodi, in retirement he enjoyed time working around the house. In his garage, Eldon always had just the right tool for any job; if he didn’t, he would create it. He and Emily were able to pursue their lifelong dream of traveling, making trips around North America (often via their small motorhome), as well as to Europe, Asia, Africa, and Australia. They were long-time active members of St. Peter Lutheran Church in Lodi.

In April 1988, Eldon became a grandfather when his granddaughter Lauren was born. Three grandsons followed: Jeff, Chris, and Ryan. Eldon and Emily loved being grandparents. They especially loved hosting their children and grandchildren during summers at the lakeside cabin they built near Shelton, Washington.

In 2007, Eldon and Emily relocated to Everson, Washington to be closer to family. As Emily’s health gradually failed, Eldon was at her side advocating for her comfort, care, and dignity. Even after he was no longer able to care for her at home, Eldon was with Emily every day he was able. Their 60-year marriage was a model of love and faithfulness to their vows. Emily passed into life everlasting in June of 2011.

In recent years, Eldon became an active member of the Lynden Senior Center in Lynden, Washington, attending bible studies and singing in the choir that met on Fridays. He enjoyed attending theater productions with his friends from the Senior Center and made frequent visits to California to visit family and friends. He was a member of Trinity Lutheran Church in Bellingham where he sang in the choir.

Eldon is survived by his three children and four grandchildren; sister Dyann (Richard) Alexander; brother-in-law Roderick Binger; sons-in-law, Alan Yoder and Martin Sippy; and daughter-in-law, Doray Kahny. He is preceded in death by his parents, his wife, and his sister Helen.

Eldon will be missed by those of us who loved him. We take comfort that he is now resting in the arms of his Lord Jesus Christ and reunited with his dear wife Emily.

To order memorial trees or send flowers to the family in memory of Eldon John Kahny, please visit our flower store.
Send a Sympathy Card