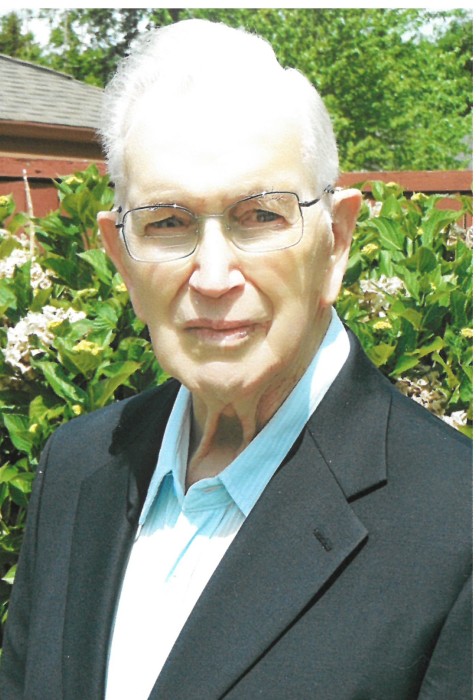 Edwin Karber, age 94 of Blaine passed away into the arms of Jesus on Tuesday, October 27, 2020 at Good Samaritan Society Stafholt in Blaine of congestive heart failure with his wife and a friend by his side. Ed was born July 25, 1926 to David M. and Anna M. (Kliewer) Karber in Balko, Oklahoma and was the youngest of eleven children. When he was a year and a half the family moved to Ulysses, Kansas, where he attended a one-room school, grades 1 to 8. In 1939 his parents moved to Whatcom County and purchased 20 acres in the Whitehorn area. Ed attended Blaine Junior High where he learned wood working, which became a lifelong hobby. Ed met Goldie Jantz in 1944 and they were married November 8, 1946. She was the love of his life for 74 years. Ed worked 10 years at the potato farm owned by Oscar Ebe, than as Millwright for 8 years for Iverson Lumber Company. In 1960 he went to work for the Whatcom County Road Department in maintenance. In 1971 he went to work for Snow Ford Auto Sales where he retired after 17 years. In his spare time he was a freelance photographer. After two weeks of retirement he became bored and became self-employed doing light construction work, remodels and built several homes, finally retiring in 2003. Ed was a man of Faith and was a member of Glendale Mennonite Church from 1946-1971 and in 1972 joined the Birch Bay Bible Community Church. He was very involved and did wood working projects for the church and in 2009 served as Chairman of the Building Committee for their new church building. Ed was also able to go on several mission trips where he was involved in building projects. He served many years with the Gideons as well. Ed is survived by his wife Goldie Karber, sister-in-law’s Mary Ann Karber and Louella Jantz and numerous nieces and nephews who adored Uncle Ed and Aunt Goldie. He was preceded by his parents David and Anna Karber and all of his siblings: sisters, Leah Unruh, Esther Schmatjen, Lula Mae Karber, Frena Wiebe, Susie Hiebert, Elizabeth Karber; brothers, Jacob, John, David and Frederick. In lieu of flowers memorials may be made to Birch Bay Bible Community Church, Bldg Fund, 4460 Bay Rd., Blaine, WA 98230, The Gideons International, Processing Center, P.O. Box 97251, Washington, DC 20090-7251 or the Lighthouse Mission Ministries, P.O. Box 548, Bellingham, WA 98227-0548.

To order memorial trees or send flowers to the family in memory of Edwin Karber, please visit our flower store.