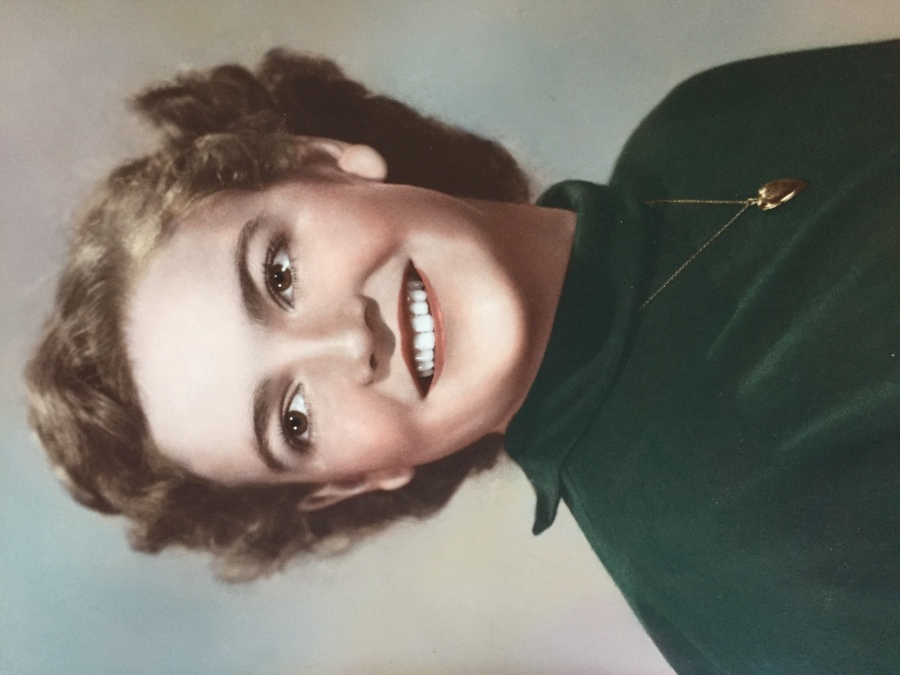 Doreen Seley Hyman, 85, passed away, Monday September 7th from complications associated with Alzheimer’s disease. She passed away under the excellent care of Highgate Senior Living in Bellingham, Washington. Doreen was born to John and Helga (Hesje) Seley on July 10th, 1935, in Glendive, Montana. Doreen used to tell stories about being a child in Montana. She and her brother Fred had to walk to school through the snow. And sometimes the story was that it was uphill in both directions. They would hold onto the tail of the horse, as the horse walked to school and broke a path for them through the snow. She told us about the animals they raised, particularly the chickens. One chicken used to chase everyone around the yard, until one day her mother had enough. She came outside, grabbed that mean chicken, and that was dinner that night. Apparently, you didn’t mess around with Helga. Doreen also said that farming was a community effort. That the farmers would move with their tractors from farm to farm, doing the planting and harvesting. Ira Sr. didn’t believe the stories about the snow until one summer when they drove through eastern Montana together. Then he changed his mind about Doreen’s stories.

Doreen’s family moved to Washington when she was still a kid. Actually the whole family moved, not just her immediate family. Her grandparents, some aunts and uncles. Most of the Seley clan moved to Washington and Oregon. Her parents had a farm for a while, even a dairy farm and a road-side store at one point. They tried a variety of ventures, with her mother Helga eventually taking up painting. If you’ve visited Doreen, you’ve seen the paintings and heard stories, especially about how Doreen would also bring her mother gifts of oil paint tubes.

Doreen graduated from LaCenter High School in 1953. After Doreen graduated high school, she moved to Portland and worked for a while. At a dance sponsored by the USO, she met a nice young man. She married Ira E. Hyman, Sr. in Portland Oregon on October 22nd, 1955. They honeymooned at Cannon Beach. And their first home together was in Pacific City Oregon. So they began their life together on the beach. Although they began their life together on the west coast, they moved to South Carolina soon after. From one coast all the way to the other.

Some great times were spent with the family during the years after they moved east. Sometimes at Surfside Beach in South Carolina, with Sonny, Thyra, and their girls. Other times they went to Santee and the lake houses of Ira’s sisters LaVonne and Rita. And some of the best times were spent camping in the mountains of North Carolina. During their marriage, they lived in Oregon, South Carolina, North Carolina, Missouri, Tennessee, and Illinois. Ira moved up in Sealtest/Kraft by taking a promotion and moving each time. She worked in accounting services. Often she worked for various healthcare companies. When she and Ira retired, she had been working in payroll at Marianjoy Hospital near Chicago, Illinois. Doreen often told stories about payroll, and the things that people would ask her to do. And that she would have to gently tell them she couldn’t do that.

When they retired, they built a house together on the family’s farm in Scranton, SC. This was another great time, being back with Ira’s family. They enjoyed building the house they wanted together. Interestingly, they had a bedroom with dark pink paint, much like the place they first rented as newlyweds in Oregon. After Ira died in 2005, Doreen moved to be near her family in the Pacific Northwest. She enjoyed being with her daughter, son, and grandchildren during the last years of her life. She went to softball games and FFA shows. She attended band concerts and ballet performances. Being grandma was a perfect thing. She was able to visit her sister, Nancy much more frequently too. And they talked every few days, until Doreen kept losing her phone.

Doreen will be buried at High Hill Cemetery in Scranton, SC. She will rest beside the love of her life and her best friend.  In lieu of flowers, please send donations to Dementia Support Northwest (DementiaSupportNW.org/donate).

To order memorial trees or send flowers to the family in memory of Doreen Seley Hyman, please visit our flower store.