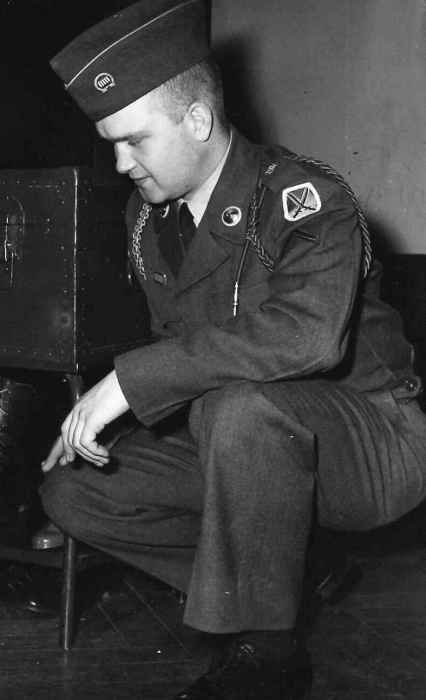 Dean B. Moors, age 82, of Bellingham passed away in Bellingham, Friday, November 11, 2016. He was born on December 26, 1933 in Bellingham, Washington to Claude Byum and Theora Francis (Johnstead) Moors.  He was the second born of 4 children.  Dean lived his life on the family farm that was purchased by his grandfather in 1902. If you could sum up Dean in one word, it would be “stubborn.”  He had his way of doing things and 50 years with a stubborn woman did not change him.  Dean graduated from Mt. Baker High School in the class of 1952.  He gave two years of his time to Uncle Sam’s Army, stationed in Germany.  He traveled from Scandinavia to Italy and all places between during his time there.  He loved to tell stories about his travels.  After he came home, he started his journey working as a Marine Carpenter.  This included Bellingham Shipyards and United Boat Builders-Uniflite.  In 1965, he met his future wife, Bonnie Bunker and they were married on February 12, 1966 in Nooksack, Washington and started their 50 year journey.  Dean was member of the Rome Grange for 63 years and the Marine Carpenters Union for 35 years. They had three children: Twins, Dan and Deanna and their youngest son, Dave.  Dean was very proud to live on the family farm and keep it in the family.  After his retirement, he spent most of his time working on his land.  He took great pleasure in using the weed eater to whack every spare blade of grass that was out of place.  He loved to garden and loved to keep his lawn and yard looking good.  When the children were young, they traveled to Sea Side, Oregon and many trips to Montana.  After Dean retired, he and Bonnie continued to make the trip to Montana almost every summer.  Dean is survived by his brother, Dale, and his wife Donna; sister, Colleen and her husband Larry Price; brother-in-law Norm Bunker and his wife Lee, his brother-in-law Harlan Bunker and his sister-in-law Jill Johnson and their families.  He is survived by his wife Bonnie of almost 51 years; and his children, Dan and his wife Roxanne Whitney and their children Ali and her partner Morgan, Darcy and her husband Evan Lee, Seth Whitney and Sam Moors; Deanna and her husband Mike Byeman and their sons, Matt, Jeremy and Alec; Dave and his wife Dorene and their children Christen and Jason.  He was preceded in death by his oldest brother Irving Moors, his parents and his many aunts, uncles and cousins. A memorial service will be held Saturday, Nov. 26, 2016, 1:00 PM at Rome Community Bible Church, 2720 Mt. Baker Highway, Bellingham, WA 98226. The family would like to give a special thanks to the Visiting Angels for their loving care. Family Suggests memorial donations be made to Northwest Therapeutic Riding, 1884 Kelly Rd., Bellingham, WA 98226 or Childrens Hospital, 4800 Sandpoint Way NE, Seattle, WA 98105.

To order memorial trees or send flowers to the family in memory of Dean B. Moors, please visit our flower store.
Send a Sympathy Card