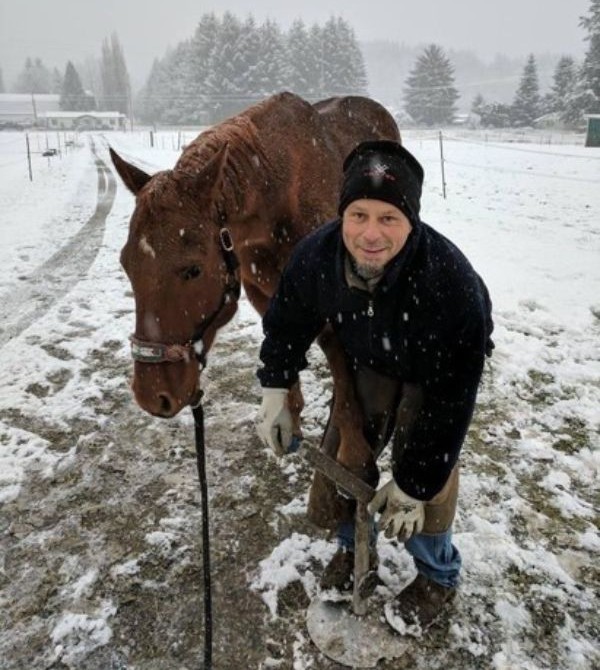 Dave Edward Richey was born on April 15, 1966 to Dan and Jan Richey in El Paso, Texas. Dave grew up with a brother, Dan, and a sister, Lisa. After high school, Dave enlisted in the United States Coast Guard where he served from 1987-1992. His first daughter, Isabel Higuera, was born in July 1993. After his service in the Coast Guard, Dave took training to become a farrier in Walla Walla, Washington. In August 1993, Dave married Nikki Rowe Matzdorff and they welcomed their daughter, Morgan, in November 1995.

In 2004, Dave married Valarie Lawson. They spent almost 18 years building a life around their children, grandchildren, horses, and dogs. Dave spent 25+ years working as a farrier in Whatcom County, where he made innumerable friends: human, equine, and canine. Although Dave frequently worked 6 days each week, he did have hobbies and activities that he enjoyed, including: fishing, target shooting, leather work, and riding his Harley. While he mostly stuck close to home, he did enjoy some travels to Arizona, California, Hawaii, Canada, New Mexico and Texas.

Dave passed away suddenly on January 20. He is pre-deceased by his parents. He is survived by his sister, Lisa (Troy) Nix, his brother Dan (Sherry) Richey, his daughters Isabell and Morgan, his nephews Logan and Skylar (Ashley) Nix and their children Gideon and Magdalena, his wife Valarie, step-children James (Jerren) Clark, Lindsay (Sam Marquez) Lawson, Hailey (Dylan Acidera) Lawson, Kelsey Lawson, grandchildren Madilyn and Kendra Weed, Keziah Richey, Sawyer and Nolan Clark, Weslee Acidera, and Slade Marquez. The loss of Dave will linger in our hearts forever. We will never forget his infectious laugh, his wonderful sense of humor, his ability to laugh at himself, his generosity towards people and animals, and his work ethic that he displayed doing the job that he loved.

To order memorial trees or send flowers to the family in memory of Dave Edward Richey, please visit our flower store.
Send a Sympathy Card